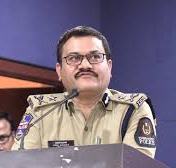 Hyderabad, March 5 (PMI): Anil Kumar, IPS, Addl. Commissioner of Police, Traffic, Hyderabad city, today convened a meeting with the owners and operators of Private Water Tankers and officials of GHMC, RTA and HMWS&SB at Traffic Complex, Nampally. Anil Kumar interacted with the Private Water Tanker owners and informed them about safety precautions to be taken to avoid road accidents in the City.

Addressing the meeting, he informed them that over 15 years old vehicles/tankers should not move on the Hyderabad City roads and if found, such vehicles will be handed over to RTA for further action. He also urged them to install speed locks in their vehicles to maintain speed limits in the city and vehicles should regularly undergo fitness check at RTO and shall carry fitness certificates. Before employing a driver, the owner should thoroughly verify their antecedents and monitor the behaviour of drivers regularly.

The Addl. CP Traffic advised that one helper/Cleaner should be employed along with the vehicle to avoid an accident when the vehicle is maneuvering. All the drivers should possess proper driving skills and awareness of Traffic Rules and Regulations of Road Safety. He also informed that Hyderabad Traffic Police will conduct Traffic awareness programs for the drivers at Traffic Training Institutes at Goshamahal and Begumpet and in all 25 Traffic Police Stations.

Addl. C.P. Traffic requested the water tanker owners to avoid the trips during school hours in school zones and to reduce trips during peak hours. It is observed that many water tankers are moving in the city without proper permission from concerned authorities. In this regard, a letter will be addressed to the revenue and waterworks authorities to keep surveillance on illegal water tankers.