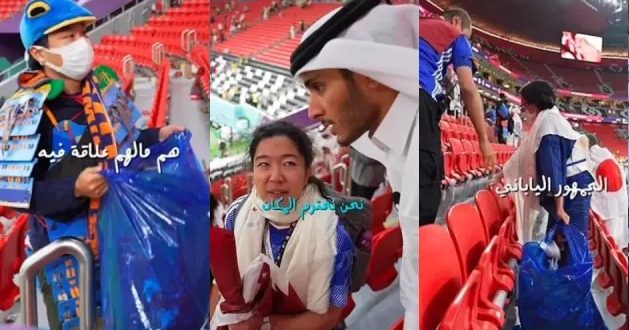 QATAR: Japanese fans at the FIFA World Cup’s opening match have impressed people across the globe after videos of them cleaning the stadium went viral. 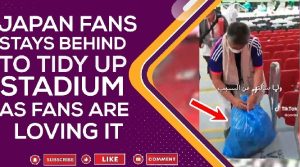 After the match on Sunday between Ecuador and host Qatar ended, excited fans left behind cups, wrappers, food waste, and much more at Doha’s Al-Bayt Stadium. This is a common practice across the planet where stadiums are left with litter once matches end.

While others left, Japanese fans decided to stay back and collect the garbage at the venue. They were seen helping other workers clean up the stands. A couple of videos recorded by onlookers quickly went viral on social media.

Shared originally by Bahraini content creator Omar Al-Farooq on Instagram, the video shows Japanese people answering the question: “Why are you doing this?”

Several other platforms then shared the same video. The Good Samaritans were seen holding garbage bags and putting the crowd’s waste into them.

They marched through different rows in the stadium’s sitting area and picked up water bottles, among other things. The effort to leave the place tidy is obvious.

When the content creator asked the Japanese why they were doing so, one of the male fans says: “We are Japanese, and we do not leave rubbish behind us, and we respect the place.” 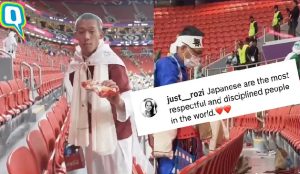 The fans said that the flags dropped on the floor “commanded respect” while they picked them up.

Social media users were shocked at the move of the Japanese fans and left several positive comments on Al-Farooq’s video and other platforms. The clip has amassed millions of views.

“They have respect and [instil] respect in their children. So as we see this year and in previous years, the Japanese people are above others in their actions,” a user said.

“They should give them free tickets,” commented another.

“Do you know the meaning of the word Islam is not limited to cleanliness, and the talk of cleanliness is weak, but this ethics is supposed to be in every Muslim,” a user expressed their disappointment.

This is not the first time Japanese fans have shown readiness to be clean and responsive. In 2018, after Japan’s match against Colombia, people were impressed with how fans cleaned up the stadium. (Int’l Monitoring Desk)