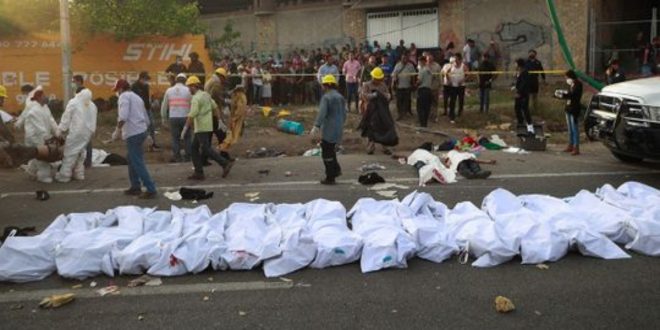 CHIAPAS/ MEXICO CITY: At least 53 people, most of them migrants and refugees from Central America, have died after the truck they were travelling in crashed in the southern Mexican state of Chiapas, officials said, in one of the worst road accidents in the country in recent years. 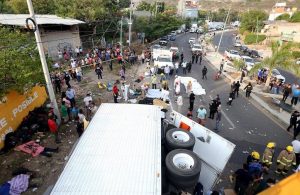 The crash occurred on Thursday when the large vehicle overturned on a dangerous curve outside the city of Tuxtla Gutierrez, said Luis Manuel Garcia, head of the Chiapas civil protection agency.

More than 100 people were inside, according to local officials, although the number may have been as high as 200, with reports that some of the bloodied passengers fled the scene for fear of being detained by immigration authorities.

Many of the injured struggled to extract themselves from the mass of bodies inside of the overturned container.

Images showed some people laid out on tarps on the ground for medical care. Images of the crash site also showed rows of what appeared to be bodies of the accident victims wrapped in white cloths. 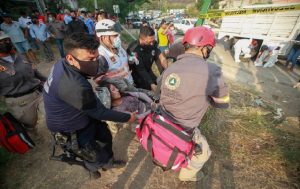 “It took a bend, and because of the weight of us people inside, we all went with it,” said a shocked-looking Guatemalan man sitting at the scene in footage broadcast on social media.

“The trailer couldn’t handle the weight of people.”

Officials said it appeared that the driver was speeding when he lost control of the vehicle.

At least 54 people were injured and taken to hospitals in the area, according to officials, with three in grave condition.

A preliminary list of the injured included dozens of people from Guatemala, which borders the Mexican state.

Guatemalan President Alejandro Giammattei wrote on Twitter: “I deeply regret the tragedy in Chiapas State, and I express my solidarity for the victims’ families, to whom we will offer all the necessary consular assistance, including repatriation.” 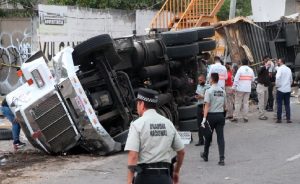 In October, authorities in the northern border state of Tamaulipas found 652 mainly Central American migrants jammed into a convoy of six cargo trucks heading toward the US border.

Irineo Mujica, an activist who is leading a march of about 400 migrants across southern Mexico, blamed Thursday’s disaster on Mexico cracking down on migrants, which comes amid pressure from the US to stem the flow of people travelling north in an attempt to cross the US-Mexico border. 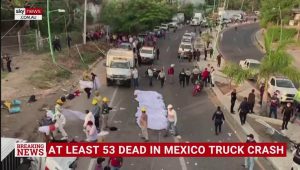 “These policies that kill us, that murder us, is what leads to this type of tragedy,” Mujica told the Associated Press news agency.

The crash caused one of the worst single-day death tolls for migrants and refugees in Mexico since the 2010 massacre of 72 people by the Zetas drug cartel in the northern state of Tamaulipas.

Mexico’s National Immigration Institute said it would offer humanitarian visas to the survivors. The agency also said the Mexican government would help identify the dead and cover funeral costs or repatriation of their remains.

State Governor Rutilio Escandon expressed his solidarity with the victims. “I have given instructions for the injured to receive prompt attention and assistance,” he wrote on social media.

“Law enforcement will determine who is responsible,” he said. (Associated Press)