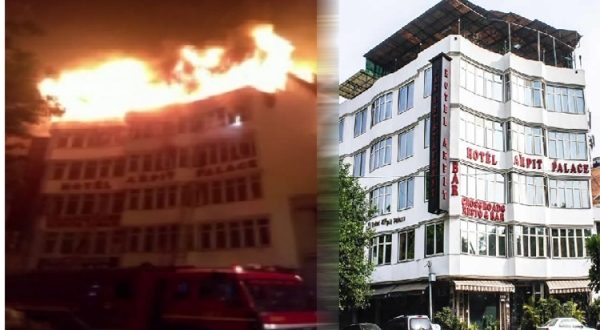 17 Dead In Massive Fire At Hotel In Karol Bagh,Delhi

New Delhi: At least seventeen people including a woman and child were killed in a massive fire accident that broke out at Hotel Arpit Palace in Karol Bagh in Central Delhi early on Tuesday.The woman and child died killed when they tried jumping from a window, reports said

According to the fire services department, seven men, a woman and a child lost their lives in the blaze. There were more than 160 people in the hotel when the fire broke out.

Delhi fire department officials said that the department received a call about the fire around 4:30 am and they immediately rushed to the spot. More than 22 fire tenders were deployed to douse the fire which started from the fourth floor of the hotel and spread till the second floor. They managed to bring the fire under control by 7: 30 AM and prevented the fire from spreading to the ground floor and basement

As of now the fire department has launched a search operation to check if any more people are trapped in the hotel.

The terrace of the hotel has an open restaurant and there could be chances of a short circuit , once the situation is completely under control and cooling down operations are completed,the fire department will conduct a thorough enquiry.

Most of the victims died due to suffocation and the critically injured are undergoing treatment at Ram Manohar Lohia Hospital.

Short-circuit suspected to be the reason behind fire

A short circuit is suspected to be the cause of the fire that broke out in Karol Bagh’s Arpit Palace hotel in the early hours of Tuesday, a senior civic official said. The fire, which killed at least 17 people, initially broke out in the second floor of the building, an North Delhi Municipal Corporation official said.

The hotel was first granted a licence in October 2005 and was renewed every year. The last renewal was done on May 25, 2018 and was valid till March 31.

“As per information gathered from the site, it reveals that the incidence of fire accrued at second floor at around 3.30 AM on February 12 due to short-circuit,” the official said.