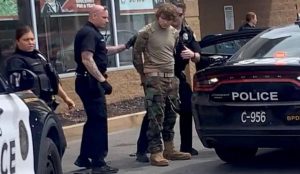 NEW YORK/ ISLAMABAD: “White Terrorism” is spreading very fast in West especially in United States of America (USA) while neither the western countries nor USA could still understand and what is happening and what type of results would come in near future, the entire sources of America and West have always been using against Muslims especially Pakistani, Afghani, Syrian, Lebanese, Saudi, Iraqi and Yemeni Shia Muslims since last many decades while the same “Western anti-Muslim Plan” is still continued across the world, sources and experts told PMI.

In another “White Terrorism” incident in New York, a “White Man” started firing on “Black Men” just because of racial and “White Supremacy Mindset, sources added.

According to reports ten (10) people were killed and three more were wounded when a man opened fire at a supermarket in Buffalo, New York, authorities said Saturday. Police said the shooter, who 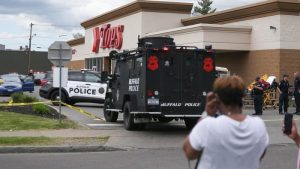 is now in custody, has been charged with murder in what officials are calling a hate crime and a case of racially motivated violent extremism.

“This was pure evil,” said Erie County Sheriff John Garcia. “This was a straight-up racially motivated hate crime from somebody outside of our community.”

At approximately 2:30 p.m., an 18-year-old White man exited his vehicle at a Tops Friendly Market, Buffalo Police Commissioner Joseph Gramaglia said at a news conference. The suspect was “very heavily armed” and had a tactical helmet and gear, Gramaglia said. Police said he also had a camera and was live-streaming the shooting.

The suspect shot four people in the parking lot, killing three, before entering the store, he said. Once he walked inside, he encountered a “beloved” retired Buffalo police officer working in the store as a security guard. The guard fired multiple shots that hit the suspect, but they did not impact him due to his tactical gear, Gramaglia said. The suspect then killed the guard, who has not been named. 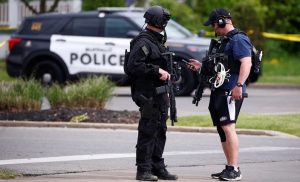 The suspect eventually returned to the front of the store and encountered police, Gramaglia said. He put a gun to his neck when he saw police, but officers talked him into putting it down and surrendering, Gramaglia said. He was then taken into custody.

Erie County District Attorney John Flynn said the suspect, Payton Gendron, has been arraigned on a charge of murder in the first degree, the most severe murder charge under New York law. Gendron pleaded not guilty.

The charge carries a sentence of life without parole. A felony hearing has been scheduled for May 19.

Flynn said Saturday night that his office is now investigating potential terrorism charges and other murder charges. At an earlier press conference, Flynn said the suspect, who allegedly used an assault weapon in the shooting, was not known to law enforcement.

Flynn said Gendron came from Conklin, New York, which is approximately a three and a half hour drive from Buffalo. Officials said it’s not yet clear why he chose this location. 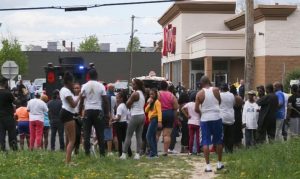 Stephen Belongia, special agent in charge of the FBI’s Buffalo Field Office, said the case is being considered a hate crime and a case of racially motivated violent extremism. Officials did not go into details about why they made that determination, but said evidence indicates some “racial animosity.”

A law enforcement source told CBS News that the suspect allegedly yelled racial slurs during the shooting. A source also said the gunman had a racial slur written on his weapon. The suspect is believed to have posted a hate-filled manifesto online with racist language.

“We will not stop until every lead is investigated, until every piece of evidence is analyzed, and until we understand how and why this horrible tragedy and crime occurred,” Belongia said, noting that the FBI is conducting an investigation that will run parallel to the state probe

Officials said at the press conference that 11 of the 13 victims were African American. Four, including one of the dead, were store employees. 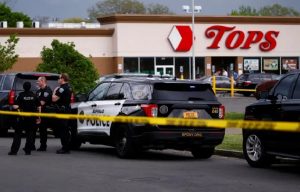 “Hate and racism have no place in America,” he said in a statement. “We are shattered, extremely angered and praying for the victims’ families and loved ones, as well as the entire community.”

New York Governor Kathy Hochul, who is from Buffalo, said the state had offered assistance to local officials and asked people to stay away from the area. Speaking Saturday night, she called the suspect a white supremacist and said the shooting was an “act of terrorism.”

Hochul also called on social media platforms to be more vigilant in monitoring content. “The fact that this act of barbarism, this execution of innocent human beings could be live-streamed on social media platforms and not taken down within a second says to me that there is a responsibility out there,” Hochul said. “And we’re going to continue to work on this and make sure that those who provide these platforms have a moral and ethical and, I hope, to have a legal responsibility to ensure that such hate cannot populate these sites. Because this is the result.” 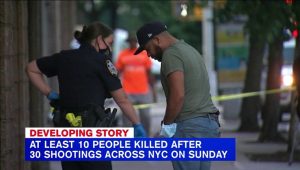 Hochul also said Friday night that the suspect obtained his weapon legally, but made illegal modifications.

Police have not released any information about the victims, but New York State Senator Tim Kennedy said one of his staffers’ children was shot.

“Tonight, a member of my staff, my extended family, is at ECMC when she should be at home,” Kennedy said. “She’s sitting in a hospital waiting room, because her beautiful, extraordinary son was shot while he was simply doing his job.”

“To say that I’m heartbroken tonight doesn’t even do it justice. I’m devastated. I’m angry. And I’m thinking about the families who won’t welcome a loved one home tonight,” Kennedy added. “All because an individual filled with pure evil made a calculated decision to senselessly take innocent lives.”

Tops Friendly Markets said in a statement that it is “shocked and deeply saddened” by the shooting. 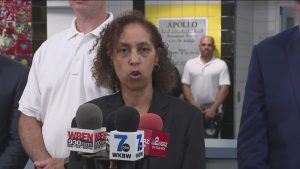 “Our top priority remains the health and well-being of our associates and customers,” the supermarket said. “We appreciate the quick response of local law enforcement and are providing all available resources to assist authorities in the ongoing investigation.”

The Buffalo incident is the latest high-profile mass shooting motivated by what authorities say is racial hatred. In 2020, the FBI elevated its assessment of the threat posed by racially-motivated violent extremists in the U.S. to a “national threat priority,” on par with the threat level posed to the country by foreign terrorist organizations. FBI director Christopher Wray told Congress in November 2019 that a majority of such attacks are “fueled by some type of white supremacy.”