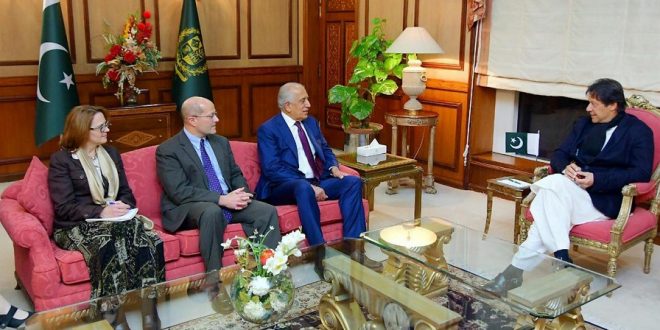 ISLAMABAD: Pakistan has enforced a complete ban on top mediators those were involved in negotiations between different Taliban groups and both Pakistani as well as Afghani governments during the last eight years while the Afghan Taliban rejected reports in the Pakistani media that they were prepared to resume meetings with the U.S. special envoy Zalmay Khalilzad in Islamabad and repeated their refusal to deal directly with the Afghan government.

Pakistani newspapers and television stations reported that a meeting in Islamabad was in prospect following discussions between Khalilzad and Pakistani officials including Prime Minister Imran Khan on Friday.

Senior Taliban leaders said that regional powers including Pakistan had approached them and wanted them to meet the U.S. delegation in Islamabad and also include the Afghan government in the peace process but that the approaches had been rejected.

“We wanted to make it clear that we will not hold any meeting with Zalmay Khalilzad in Islamabad,” Taliban spokesman Zabiullah Mujahid in a statement.

The official sources claimed that talks between the two sides were the result of a continuous secret struggle of some Pakistani, Afghani and Indian Muslims those have been performed a very vital role as mediators but on the specific directives of Pak security forces, the present government has enforced complete banned overall mediators including most influential Pakistani journalist Syed Jaffer Abbas Jafri, Qari Ghulam Rasool Wilayati, Maulana Muhammad Ehsan Kohati, Hafiz Abdul Rauf Yaqoob, Sardar Syed Aftab Alam Shah, Mufti Hafeezullah Noorullah and Mullah Mir Himayaullah Afridi those were the part of peace negotiations on the special request of both countries hence, the Islamic Republic of Iran, Turkey, Qatar, Saudi Arabia, Iraq, Yemen, India, and China were always acknowledged their contribution towards peace in South and Central Asian region.

The main reason for the ban is neither Pakistan nor the Afghan government is ready to include women’s participation in negotiations whereas, the Taliban have two serious problems. Firstly, they have not included the democratically the elected government of Afghanistan, led by President Ashraf Ghani secondly; they have failed to include a single woman while the said mediators were also insisting women’s participation in negotiations that’s why Pakistani government enforced a complete ban on all mediators and directed Law Enforcing Agencies to keep them away from all official activities and representation, sources added.

One of the said mediators told PMI yesterday that including him only two peacekeepers are living in Pakistan while the rest are being either lived overseas or have left their countries earlier but if they return back to their countries they would definitely either be murdered by different Taliban groups or arrested by their government because we all have declared mutinied officially.