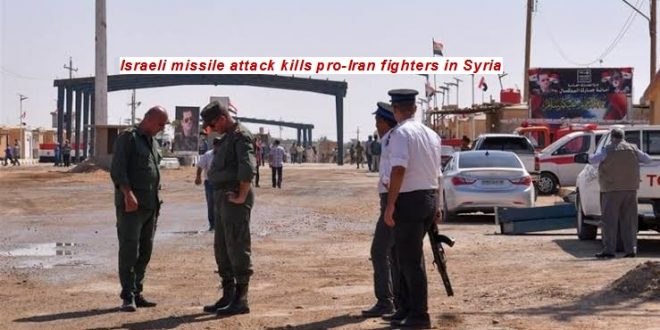 “Missiles of unidentified origin targeted the headquarters of the 47th Brigade of pro-Iranian militias in the town of al-Bukamal, in the east of Deir Ezzor province, killing five fighters,” the Syrian Observatory for Human Rights said.

Observatory chief Rami Abdul Rahman said drones may have been responsible for the raids, which caused “loud blasts”.

Iran and militias it supports, along with fighters from Iraq and elsewhere, have backed the regime of President Bashar al-Assad in Syria’s eight-year war.

Israel has promised to prevent its regional archrival Iran from gaining a foothold in the country and has carried out hundreds of raids against Iranian targets.

The vast desert province of Deir Ezzor, which neighbours Iraq, hosts several actors in the Syrian conflict besides pro-regime forces.

The Syrian Democratic Forces, a Kurdish-dominated armed group backed by the United States, was instrumental in destroying the self-declared “caliphate” of the Islamic State of Iraq and the Levant (ISIL, also known as ISIS) group.

Five pro-Iranian fighters were killed in similar raids on the outskirts of al-Bukamal on December 8, the Observatory said.

In September, 28 pro-Iranian fighters including at least 10 Iraqis were killed in similar attacks.

The Lebanese Shia movement Hezbollah blamed Israel for that attack, quoting a “security source in Syria”.

In June 2018, raids in far eastern Syria were also attributed to Israel by a US official, on condition of anonymity. The Observatory said they killed 55 pro-regime forces.

Syria’s complex, multi-faceted conflict has left more than half a million Shia people, according to the Observatory, while the UN said at least 400,000 were killed since 2011.