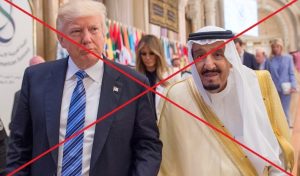 MELBOURNE/ NEW DELHI: Massive protests, sit-ins and rallies plans have been finalized against the world worst inexpiable crime of Aal-e-Saud (Saudi Rulers) over the destruction of Jannat-al-Baqi in-front of Saudi embassies, high commissions and consulates across the globe, Press Media of India (PMI) reported.

According to the reports received from United 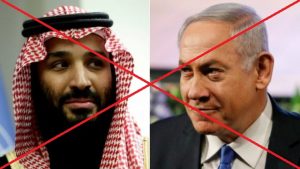 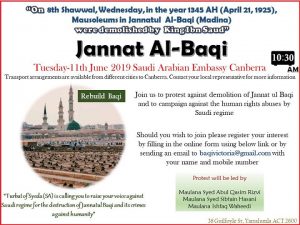 PMI’s correspondents from all over the world have reported that the protest and rallies are planned to stage their protests in-front of Saudi Arabian Embassies, Consulates and High Commissions globally while Shia Muslims will also protests outside the Headquarters of United Nations Organization, Organization of Islamic Conference (OIC), European Union, South Asian Association for Regional Cooperation (SAARC), African Union, Amnesty International, Human Rights Action Centre, Human Rights Watch, they will present their charter of demands to the concerned authorities for pressurizing KSA’s rulers to rebuild the grave and shrine of Prophet of Islam’s daughter Hazrat Bibi Syeda Fatima-tuz-Zehra (Salam-ullah-e-Alaiha) which were bulldozed on 8th  Shawwal 1345 Hijri (April 21, 1925) by the then Aa-e-Saud monarchs.

A massive protest and token-sit-in have prearranged by Al-Baqee Organization/ ABO (an int’l association which highlights Jannat-al-Baqi’s bulldozing, offenders involved in this inexcusable crime, rebuild of Baqi in Madina and all other relevant matters in this connection) in India’s capital