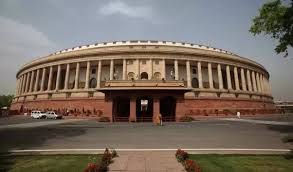 The Winter Session of Parliament will begin today. The Session will have 20 sittings. It will end on the 13th of next month. Prime Minister Narendra Modi expressed hope that both Houses of Parliament will have constructive debates on ways to empower citizens and further India’s development.
Mr Modi also assured an all-party meeting that the government is ready to discuss all issues. During the meeting in New Delhi, Prime Minister said, the most important job of Parliament is to discuss and debate. Briefing reporters after the meeting, Parliamentary Affairs Minister Pralhad Joshi said Mr Modi urged the political parties to make Winter Session of Parliament productive, like the last one. He said Prime Minister stated that constructive discussions in Parliament keep the bureaucracy.

Mr Joshi said the Prime Minister also talked about the Constitution Day to be observed on November 26. Mr Modi said the Constitution and the democratic system of the country are unique and this should be branded.
The meeting was attended by Home Minister and BJP chief Amit Shah, Congress leaders Ghulam Nabi Azad and Adhir Ranjan Chowdhury, and TMC leaders Sudip Bandopadhyay and Derek O’Brien. Among others who attended the meeting include Chirag Paswan of the LJP, Ram Gopal Yadav of Samajwadi Party, Jayadev Galla of Telugu Desam, Satish Chandra Mishra of BSP, Navneetha Krishnan of AIADMK and TR Baalu of DMK.
Rajya Sabha Chairman M Venkaiah Naidu also held a meeting of the leaders of several parties in the Upper House on Sunday. A meeting of the ruling NDA allies was also held in Parliament House.

In a tweet, Prime Minister said, he had an extensive meeting with the BJP Parliamentary Party. He said the party will utilise the Session to further views on various developmental issues and contribute to transforming people’s lives.
The Prime Minister said the NDA represents the country’s diversity and the aspirations of 130 crore Indians. He said no stone will be left unturned in ushering a qualitative change in the lives of farmers, youngsters, Nari Shakti and the poorest of the poor.