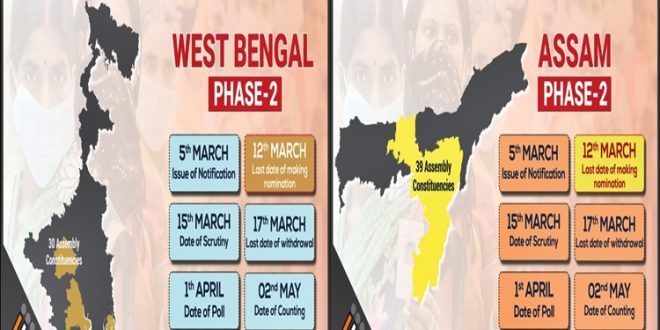 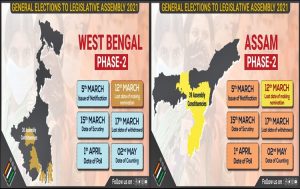 Voting for second phase of Assembly elections in Assam and West Bengal tomorrow. All necessary arrangements have been in the two states for the polling tomorrow.

In West Bengal, 30 seats spread over four districts will go to polls in this phase. Polling will be held on 9 seats each in East and West Medinipur, 8 seats in Bankura and 4 seats in South 24 Parganas. The state is witnessing an eight-phase election this time.

Over 75 lakh and 94 thousand electors will decide the fate of 171 candidates including the heavyweights in the second phase. While BJP and Trinamool Congress are contesting on all 30 seats, Congress, Left parties and their alliance partner Indian Secular Front are fighting under the banner of Sanyukt Morcha. CPIM has fielded 15 candidates, Congress 9, CPI 2, ISF 2 and AIFB and RSP one each while 7 candidates of BSP, 32 independents and 44 others are also in the fray.

In Assam, 345 candidates including 26 women are in fray for 39 Assembly Constituencies spread over 13 districts that will go to polls tomorrow. Over 73.44 lakh voters including 36.09 lakh women and 135 third gender persons will decide the fate of these candidates.

Chief Electoral Officer of Assam Nitin Khade has said that all preparations are in place to ensure free and fair polling tomorrow. Talking to AIR Correspondent, Mr. Khade said that all required facilities would be available for voters. He urged voters to come out and exercise their democratic rights.

There are three main alliances this time including the BJP-led National Democratic Alliance with partners Asom Gana Parishad (AGP) and the United People’s Party Liberal (UPPL) and Mahajot or Grand Alliance led by the Congress. It includes All India United Democratic Front (AIUDF), Bodoland Peoples’ Front (BPF) and the Left parties while yet another conglomerate of Assom Jatiya Party (AJP) and Raijor Dal is also there. BJP has fielded 34 candidates, Congress has 28, AJP -19, AIDUF seven, AGP six and BPF has four while 176 independents and others are also trying their luck.

The Election Commission has decided to use Voter Verifiable Paper Audit Trail (VVPAT) along with Electronic Voting Machine (EVM) at every Polling Station, with a view to enhance the transparency and credibility of the election process.