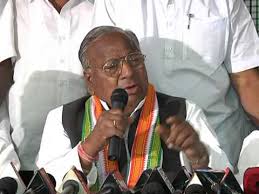 Speaking to the media here on Tuesday along with T Jeevan Reddy, VH faulted the Telangana government for not allowing the leaders, who fought for Telangana State, to meet the people. Asking the Chief Minister whether MRPS founder-president Manda Krishna Madiga and Telangana Political JAC chairman Prof. M Kodandaram were betrayers of Telangana? He also asked where was the need of Pawan Kalyan’s tour in Telangana if everything was good in the State. He said he would show the problems of the people in Telangana if Pawan Kalyan comes along with him. He also asked Pawan whether he was not in a position to see the

Expressing anger at Pawan Kalyan, VH asked Pawan as to why he was not responding to farmers’ suicides. Faulting Pawan Kalyan, Jeevan Reddy asked Pawan to merge his Jana Sena party into TRS if everything was good in Telangana. Terming Jana Sena as Bhajana Sena, Jeevan Reddy alleged that Pawan Kalyan, who criticized KCR in the past, was now doing ‘Bhajan’ of TRS party. “It will be good if Pawan merges his party into TRS”, he ridiculed. He also pulled up the State government for failing to give permission to the students’ for unemployment rally and kept Manda Krishna in jail for taking up Deeksha, for giving permission to Pawan Kalyan’s tour in Telangana State.

2018-01-23
admin
Previous Pawan to reveal his action plan by March 14, to contest 2019 polls in Telangana
Next Ponnam threatens to halt Pawan’s tour of Telangana