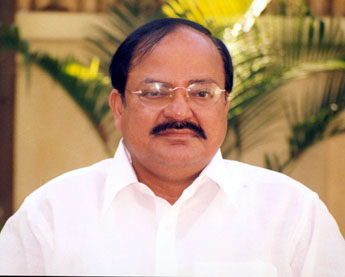 VENKAIAH FOR TELUGU STATES TO WORK TOGETHER FOR DEVELOPMENT AND PROSPERITY.

admin August 21, 2017 Hyderabad, Top News Comments Off on VENKAIAH FOR TELUGU STATES TO WORK TOGETHER FOR DEVELOPMENT AND PROSPERITY. 510 Views 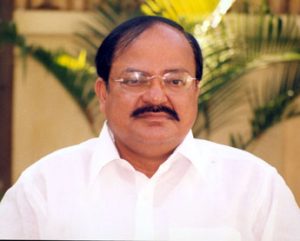 Hyderabad : Vice President of India M. Venkaiah Naidu on Monday assured that despite the constitutional constraints attached to his present status he would strive for the development of both the Telugu States by pursuing to resolve various pending issues.

Speaking at the Public Felicitation Ceremony organized by the State Government at Raj Bhavan, the Vice-President also called upon the Chief Ministers of both the states —  K, Chandrasekhar Rao and N. Chandrababu Naidu – to work together and take forward the  Telugu States to prosperity. There might be certain differences of opinion among them but they could be resolved amicably through discussions, he observed.

Laying emphasis on inclusive growth, the Vice President called upon the elected representatives of the people to strive to fulfill the promises made  and ensure that growth and developments reach the people. “ It is imperative that everyone should feel that they are part of the development” he observed and added that for this the last man in the queue should reap the benefits of development.

Referring to the observation made by Governor earlier that Rajya Sabha under the Chairmanship of Venkaiah Naidu  would be made functional, the Vice President observed that not only Rajya Sabha, even Lok Sabha, Legislative Assemblies and Legislative Councils should also be functional.  Quoting former President Pranab Mukherjee, he said that “discuss, debate and decide” should be the prime functioning of the parliamentary and legislative bodies. The Opposition should have its say and the Government should have its way, he added.

Recalling his association with Telangana State, the Vice-President said that though he was born inNellore and studies in Vizag, his political career began and grew from Hyderabad. There is not a single mandal or taluka in the state which he had not visited, he observed.  Hyderabad is meeting place for diverse languages, culture and traditions. In fact Hyderabad can be termed as a “Mini Bharat”, he observed.

The Vice President also emphasized the need for the government to Make all efforts to protect and preserve the native language and culture. He also advised that proficiency in Telugu should be made compulsory for all jobs.

Earlier Chief Minister K. Chandrasekhar Rao recalled his long acquaintance with Venkaiah Naidu  said  that it was a great hour for Telugu people in having a Telugu man holding the nation’s second highest post of Vice-President. Venkaiah Naidu is great orator and his speeches not only in Telugu but also in English and Hindi are always tinged with wit and satire.

With his vast experience in politics and public service, he would bring laurels to the post, he observed. He thanked the Vice-President giving the opportunity to Telangana State to be the first to accord a civic reception after assuming office.

Governor ESL Narasimhan speaking on the occasion said that it was a great honour for the Telugu people to have their own Telugu man as the Vice-President of India. It was befitting that the State Government has organized the public reception to a person ,coming from a farmer’s family,  who rose from a student leader to occupy the high office of Vice-President. He was confident that Venkaiah Naidu would bring immense glory to the post , especially as Chairman of Rajya Sabha to make it more functional.

Union Minister Bandaru Dattareya also spoke on the occasion recalling the services rendered by Venkaiah Naidu as a legislator, MP, Union Minister and as President of BJP.

The Vice-President was felicitated by the Chief Minister in a traditional way by applying tilak on his forehead and garlanding him and presented him with silk clothes and memontoes.