Uttam quite optimistic about second spell of bus yatra

Hyderabad,  Telangana Pradesh Congress Committee (TPCC) President N. Uttam Kumar Reddy has expressed confidence that the second spell of first phase of Congress Praja Chaitanya Bus Yatra, to be held from March 4  and 8 would be as successful as the first spell.
The first spell of bus yatra was held from February 26 to 28 wherein Chevella, Vikarabad, Tandur, Sangareddy, Zaheerabad and Narayankhed assembly constituencies were covered. A three day break was taken in view of Holi festival and the yatra is being resumed from Sunday.
In a live interaction with party workers on social media platform Facebook on Saturday, Uttam Kumar Reddy said that the bus yatra has received tremendous response on all three days in six constituencies. He said people from different sections of the society, especially SCs, STS, BCs, minorities, women, farmers, students and youth participated in large numbers. He informed that the Congress Bus Yatra will cover 10 more Assembly constituencies in the second spell from 4th to 8th 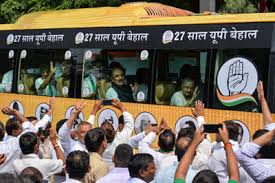 March. There will be public meetings at Bodhan and Nizamabad (Urban&Rural) on March 4; Armur and Balkonda on March 5; Nirmal and Metpally on March 6; Sircilla and Manakonduru on March 7 and Husnabad and Huzurabad on March 8. He asked party workers and common people to take part in the Praja Chaitanya Bus Yatra which is aimed at creating awareness among people regarding the failures of TRS Government.
Replying to different questions, Uttam Kumar Reddy accused IT Minister K. Tarakarama Rao of resorting to cheap politics. He said baseless and personal allegations were being levelled against him while ignoring the fact that he had served the country as a fighter pilot of Indian Air Force. “As an IAF fighter pilot, I’ve risked my life several times defending our country on Pakistan and China borders. TRS leaders have no stature to question my integrity and commitment towards people. We will give a befitting reply to all their allegations during the bus yatra,” he announced.
Uttam Kumar Reddy advised party workers to gear up for next elections which might be held in December this year. Through phone calls, the party workers from Khammam, Mahabubnagar, Ranga Reddy, Nizamabad, Peddapally and other areas narrated their problems. Ganesh, a student of Kakatiya University, complained that KCR Government was trying to suppress students using police force. In his reply, the TPCC Chief said that Telangana became a reality only due to sacrifices and struggle of students. However, instead of rewarding those students with jobs, TRS Government is suppressing their voice through intimidation and anyone speaking against it is being implicated in false cases. He said while a neighbouring State filled 12,000 teachers post, TRS Government did not fill even 12 vacancies of teachers during the last four years.
The TPCC chief said that the youth should not worry about their future as the Congress party was all set to return to power in next elections. He said besides filling up all vacancies and creating lakhs of new jobs in both private and public sector, the Congress Government would pay a monthly allowance of Rs. 3,000 to all jobless youth.
Uttam Kumar Reddy took a strong note on rising police excesses on Congress workers. “After coming to power, we will not spare anyone who are harassing us now. We will return them all those things with interest,” he said while asking the Congress workers to maintain restrain.
Another caller Mohan Reddy from Bhongir pointed that the KCR Government has failed to start NIMS at Bibinagar. Responding to this question, Uttam Kumar Reddy said that Chief Minister K. Chandrashekhar Rao has failed to pressurised the Centre for upgrading Bibinagar NIMS into AIIMS institution. He promised that the next Congress Government would upgrade the utility into a super speciality hospital.
Sai Goud, a chilli farmer from Khammam, complained that chilli crop was being procured in Khammam Market Yard in the presence of police personnel. Condemning the incident, Uttam Kumar Reddy said that the TRS Government had earlier chained and handcuffed the chilli farmers after implicating them in a false case just for demanding remunerative prices for their produce. He said that the TRS Government was trying to instil fear among all farmers using police force. He announced that the next Congress Government would procure chilli for Rs. 10,000 and pay Rs. 6,000 for cotton.
On being advised by a Congress worker, Veerabhadram Goud from Khammam, to launch a padayatra after the end of ongoing of bus yatra, Uttam Kumar Reddy said that the plan already existed and it was being given final touches by the party leadership. Responding to various questions on party candidates, he said that a national-level agency has been assigned the task of constituency-wise survey so as to pick appropriate candidates with higher chances of winnability.
The TPCC Chief’s live interaction on Facebook received overwhelming response. Due to paucity of time, Uttam Kumar Reddy could not receive all calls. Therefore, he advised the party workers to send their queries on his message box on Facebook and promised that he would personally answer all of them.