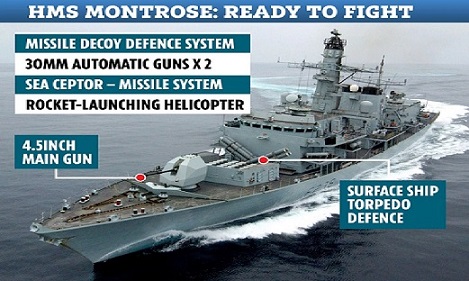 US warships ready to deter Iranian forces in Arabian Sea

DUBAI/ WASHINGTON: Sky News is given rare access to Abraham Lincoln and to some smaller ships at a US naval base in Bahrain. 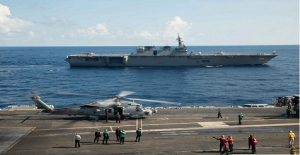 Fast jets, spy planes and helicopters fly scores of sorties every day from a US aircraft carrier in the Arabian Sea, positioned within striking distance of Iran.

President Donald Trump moved USS Abraham Lincoln and other warships into the region in May, slightly sooner than planned, as tensions grew between Washington and Tehran.

Officers say their mission is to deter Iranian forces from attacking US targets but they are also prepared to launch offensive strikes if given the order.

A large part of deterrence is the readiness that backs that deterrence up,” said Rear Admiral Michael Boyle, commander of Carrier Strike Group 12.

“We are ready to defend the US and the US interests if called upon… My job is to be here, to be ready, to deter and to defend if required,”

The carrier has not transited through the Strait of Hormuz – the main focus point of the crisis with Iran – despite the ship’s deployment to the region being highly publicised by President Trump and other members of the administration.

Admiral Boyle said he could make the transit if he wanted but he preferred to hang back in the northern Arabian Sea. 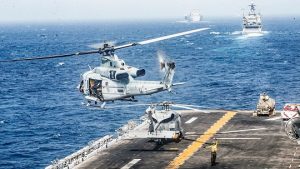 “For our mission here, which is deterrence, we are in the place we need to be,” he said.

“The people in the know in Iran know that we are more of a deterrent here than we are in the Arabian Gulf because from this position we can reach them and they can’t reach us. In a boxer’s analogy we have got overreach from the spot where we are right now.”

Warplanes on the carrier were primed to strike Iranian targets in June after Iran shot down a US surveillance aircraft. But President Trump decided not to retaliate at the last moment.

Aircrews remain on alert, including a Royal Navy fast jet pilot who is embedded with the air wing as part of an exchange program.

Many of the 68 aircraft aboard the carrier are equipped with cameras, radars and other sensors.

They help to increase surveillance in and around the Strait of Hormuz, including intelligence on the movement and activities of Iranian forces, which is shared with allies. 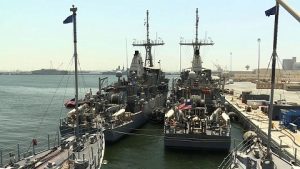 This makes it harder for Iran’s elite Islamic Revolutionary Guard Corps to target commercial tankers and other merchant vessels without being caught on film.

“We make sure if somebody is doing something that is destabilizing or creating an action that impedes the freedom of navigation then we are there to video it, to make sure it gets out,” said Captain Bill Reed, commander of the air wing.

Capturing such images is an important weapon to win public support in an information war.

Abraham Lincoln’s deployment could be extended, though such a move is not being discussed at the moment, commanders said.

The carrier and other warships that make up Carrier Strike Group 12 left the US port of Norfolk in April on a seven-month tour. 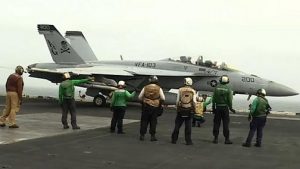 Their role in the region is clear.

What seems less well defined is a plan by the United States, backed by Britain, to build an international coalition to boost protection for merchant shipping in the Gulf.

That is partly because no other countries have yet committed any vessels.

Captain Peter Mirisola is the head of Task Force 55, part of the US 5th Fleet, which is headquartered out of Bahrain.

He oversees two destroyers that are providing greater protection to US-flagged merchant ships in the Strait of Hormuz – a mission dubbed Operation Sentinel.

It is running along with a Royal Navy deployment to protect UK-flagged vessels.

Asked whether he was disappointed at the absence of other allies, Captain Mirisola said: “This is a situation that requires time. Each nation’s capital has to go through the process of force generation and seeing what capabilities they can or are willing to provide to the International Maritime Security Construct.” 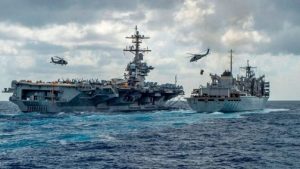 The politics of the Iran-US standoff – triggered by President Trump’s decision to pull Washington out of a nuclear deal with Tehran and re-impose sanctions – make it hard for other countries to get involved with their military forces.

However, this is an international problem. A fifth of the world’s oil passes through the Strait of Hormuz. Any disruption to tanker traffic is a challenge for everyone.

It means a heightened risk for four British and four American mine-hunters based out of Bahrain.

The vessel encountered Iranian forces but the exchanges were standard.

Ships like hers could be in high demand if the tanker crisis escalates and Iran starts to mine the strait as it did during the so-called tanker war of the 1980s. 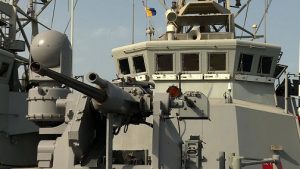 “If there is a large [number] of mines we would be called on to go try and defeat them, at least identify where they were and if we can neutralize them to allow more shipping to go through.”

Two of the British mine-hunters could be seen on Sunday alongside in Bahrain as well as HMS Duncan, a Type 45 destroyer, deployed to the region to help protect UK-flagged ships.

A UK defence source said the warship was being resupplied for a couple of days before it was due to head back out on operations. It arrived in the Gulf a fortnight ago.

The US naval base sits next to a new Royal Navy base called HMS Jufair. Requests to speak with Royal Navy officers about their mission in the region were declined. (Int’l News Desk)