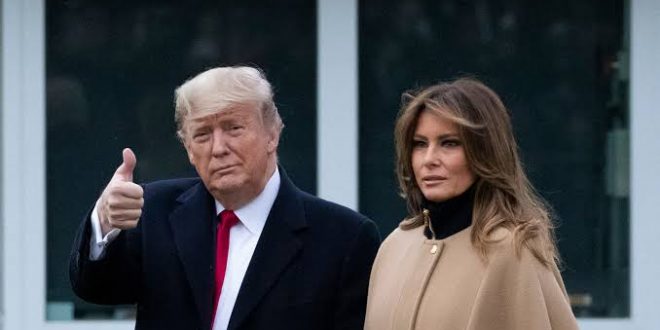 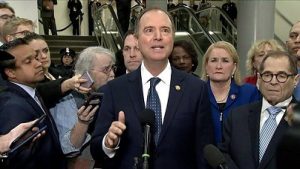 WASHINGTON/ NEW YORK: The US President Donald Trump is set to be acquitted in his impeachment trial after senators voted against calling witnesses or admitting new evidence.

Democrats hoped four swing Republicans would vote for witnesses, which would have extended the trial without in all likelihood changing its outcome.

In the end, only two of the four Republicans voted with Democrats.

The trial now moves forward to a vote on whether to acquit President Trump, which he is all but certain to win.

Senior members of President Trump’s Republican Party pushed from the outset for a speedy trial with no witnesses or new evidence. Above all, they wanted to avoid senators hearing from former National Security Adviser John Bolton. 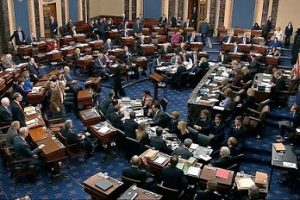 According to reporting by the New York Times, Bolton writes in his forthcoming book that the president directly instructed him to withhold military aid from Ukraine in exchange for dirt on a Democratic political rival, Joe Biden.

Testimony from Bolton about his involvement in the Ukraine affair threatened to significantly undermine the case made by the president’s lawyers during his trial.

The Senate will vote on Wednesday 5 February on whether to convict or acquit the president on the two articles of impeachment brought against him. 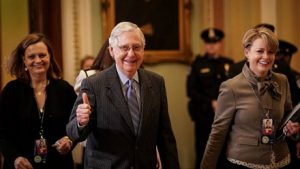 Democratic Senate leader Chuck Schumer said there would be four votes on Friday night on Democratic amendments, followed by closing arguments on Monday, speeches from senators from Monday to Wednesday, and a final vote on Wednesday – the day after President Trump’s State of the Union address.

A two-thirds majority in the chamber of 67 votes is required to remove him from office. The Republicans control the Senate with a 53-47 majority over Democrats, and no Republican senator has signalled that they plan to vote for Trump’s removal.

Eyes will instead fall on several Democrats in Republican-leaning states who have indicated they may vote to acquit. Any Democratic defections would be a symbolic victory for the president that he will likely use to his advantage on the campaign trail in the coming months. 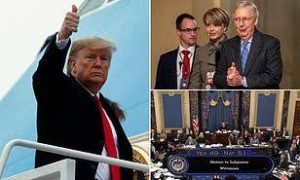 The battle over witnesses intensified a week ago after reports emerged that Bolton might have highly damaging testimony about the president’s involvement an alleged quid pro quo with Ukraine.

Bolton’s forthcoming book reportedly alleges that the president personally directed the scheme to get dirt from Ukraine on Biden, a former US vice president. The revelations threatened to undo Republican arguments that no impeachment witness had first-hand testimony of the president’s involvement.

But the slim chance of Bolton being called to give testimony to the Senate slipped away from Democrats on Friday, after two of the four Republican senators they had hoped would defect confirmed that they would not.

Senator Lamar Alexander of Tennessee said in a statement late on Thursday that, while the Democrats had clearly demonstrated the president’s actions were “inappropriate”, they had not proved to be impeachable offenses.

“The question then is not whether the president did it, but whether the United States Senate or the American people should decide what to do about what he did,” he said.

“I believe that the constitution provides that the people should 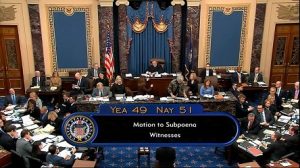 make that decision in the presidential election that begins in Iowa on Monday.”

Senator Lisa Murkowski of Alaska, another moderate, said in a statement on Friday afternoon: “The House chose to send articles of impeachment that are rushed and flawed. I carefully considered the need for additional witnesses and documents, to cure the shortcomings of its process, but ultimately decided that I will vote against considering motions to subpoena.” 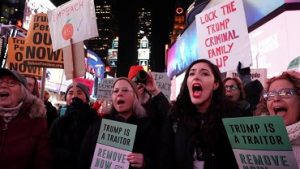 Republican senators Susan Collins of Maine and Mitt Romney of Utah decided to vote to call witnesses, but they were alone among the 53-strong Republican Senate caucus.

Democratic House impeachment managers said throughout the process that a trial without witnesses amounted to a sham trial. They were joined on Friday by President Trump’s former White House chief of staff, John Kelly, who told a New Jersey publication that Trump had been subjected to only “half a trial”. (Int’l News Desk)