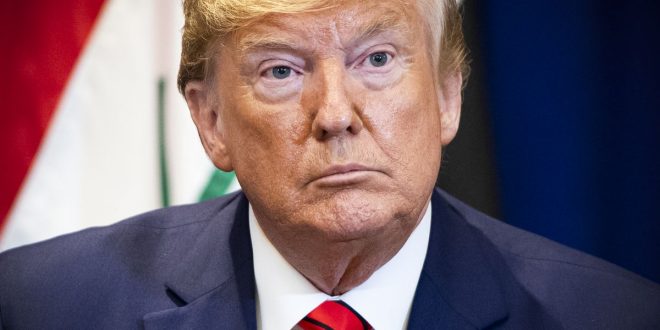 WASHINGTON/ TEHRAN/ MELBOURNE: US House Democrats accused Donald Trump of abusing his office for political gain and trying to obstruct the Ukrainegate investigation, in a highly anticipated report that paves the way for articles of impeachment and a trial in the Senate. 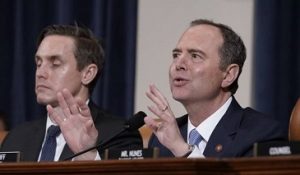 In a 300-page report, the House committees pursuing the impeachment inquiry said the “evidence is clear” Trump sought to advance his re-election prospects by pushing Ukraine to dig up dirt on Joe Biden, the former vice-president, and probe debunked claims that Ukraine, rather than Russia, meddled in the 2016 election.

“In doing so, the president placed his own personal and political interests above the national interests of the US, sought to undermine the integrity of the US presidential election process and endangered US national security,” said the report which was compiled by the House intelligence, oversight, and foreign affairs committees, The Financial Times reported.

Over the coming weeks, the Democrats are expected to draft articles of impeachment that will almost certainly pass the House, where the party has a majority. Once the House impeaches Trump, there will be a trial in the Senate, where Trump would have to lose the support of 20 Republicans to be convicted and removed from office. 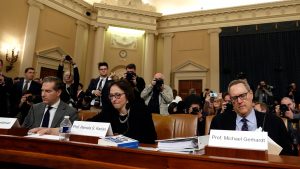 Adam Schiff, the Democratic head of the intelligence committee, which held the public hearings that informed the report, said investigators had documented a coordinated effort by the president and his aides to pressure Ukraine to do “his political dirty work”.

“It involves a scheme in which Donald Trump withheld official acts, a White House meeting, as well as hundreds of millions of dollars of needed military assistance in order to compel that power to deliver two investigations that he believed would assist his re-election campaign,” Schiff said on Tuesday after the report was released.

The White House said the report was a “one-sided sham” that “utterly failed” to find evidence of wrongdoing. “Schiff’s report reads like the ramblings of a basement blogger straining to prove something when there is evidence of nothing,” it said.

The impeachment inquiry was triggered when a CIA official filed a whistleblower report about a July 25 phone call in which Trump asked his Ukrainian counterpart, Volodymyr Zelensky, to investigate Biden and his son, Hunter Biden, who served on the board of Burisma, a Ukrainian gas company 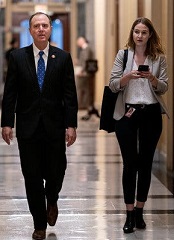 In the call, Trump also asked Zelensky to do him “a favor” by probing the conspiracy theory about Ukrainian interference in the 2016 election.

Nancy Pelosi, the Democratic House speaker, for months resisted calls from lawmakers to open an impeachment inquiry because she was worried it would energize Trump supporters ahead of the 2020 election. But she launched an inquiry in September following the revelations about the July call and related concerns that Trump had withheld $391m in military aid to Ukraine to put pressure on Zelensky.

The report on Tuesday detailed how Trump and other senior White House members had refused to comply with the investigation, including by disregarding subpoenas for documents and preventing certain witnesses from testifying. It said the lack of co-operation flew in the face of the constitution and legal and political precedent. 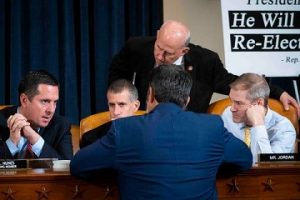 Richard Nixon and Bill Clinton — had complied with congressional requests. It added that Nixon’s case showed that non-cooperation can be the basis for impeachment. “When. . . Nixon withheld tape recordings and produced heavily edited and inaccurate record, the House judiciary committee approved an article of impeachment for obstruction,” the report said.

The House intelligence committee voted on Tuesday evening by 13 to 9 to send the report to the House judiciary committee, which will lead the next phase of the inquiry.

The judiciary panel will hold a hearing with legal scholars on Wednesday, as part of the process to determine if the evidence rises to the constitutional standard for impeachment of “treason, bribery, and other high crimes and misdemeanors”.

Some Republicans are privately critical about the July call and Trump’s move to withhold military aid from Ukraine. But there has been no indication they will publicly break ranks and convict the president. Republicans also note that he provided Kyiv with anti-tank Javelin missiles to help it protect itself from Russia, after the Obama administration refused to provide lethal weapons to the country. 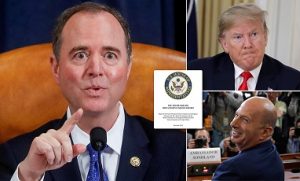 The report was released while Trump was in London for the 70th anniversary summit of Nato. Republicans slammed the report, repeating their view that the Democrats have been intent on finding a way to impeach Trump since he won the 2016 election, and were using the Ukraine scandal as a pretext for that goal.

“Placing own personal and political interests above the national interests of the United States’ is a remarkable accusation for Democrats to make of @realDonaldTrump — given they’re the ones who have spent 3 years trying to impeach him at the expense of nearly all productivity,” Mark Meadows, a North Carolina Republican, tweeted.