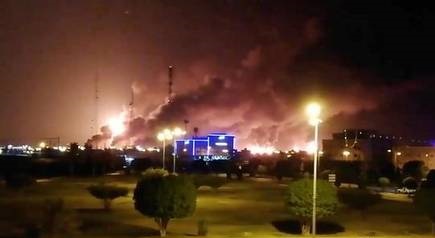 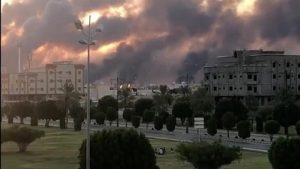 Citing an interior ministry spokesperson, the SPA news agency said on Saturday the blazes at the facilities in Abqaiq and Khurais were under control.

The ministry did not identify the source of the attack and said investigations were ongoing. No one immediately claimed responsibility.

A Saudi-led military coalition has been battling Yemen’s Houthis rebels since March 2015, and the latter has launched similar attacks in the past. Last month, an attack claimed by the Houthis sparked a fire at Aramco’s Shaybah natural gas liquefaction facility but no casualties were reported by the company.

Online videos showed smoke rising above the state-owned oil giant’s facility in Abqaiq as what appeared to be gunfire could be heard in the background. 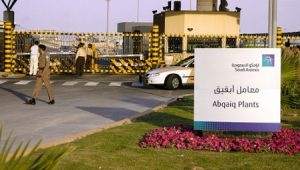 Saudi Aramco describes its Abqaiq oil processing facility, some 60 kilometres (37 miles) southwest of Dhahran in the kingdom’s Eastern Province, as “the largest crude oil stabilisation plant in the world”.

The facility processes sour crude oil into sweet crude, then later transports onto transhipment points on the Gulf and the Red Sea. Estimates suggest it can process up to seven million barrels of crude oil a day.

The plant has been targeted in the past – in February 2006, al-Qaeda-claimed suicide bombers tried but failed to attack the oil complex.

The Khurais complex is located about 160km (99 miles) from the capital, Riyadh

There was no immediate effect on global oil prices as markets were closed for the weekend across the world. Benchmark Brent crude had been trading at just above $60 a barrel. (Int’l Monitoring Desk)