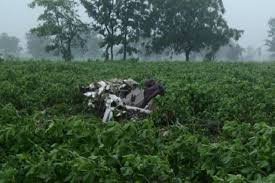 Hyderabad, Oct.6 (PMI): Two trainee pilots were reportedly killed on the spot when a Cessna aircraft crashed in cotton fields near Sultanpur village under Bantwaram mandal of Vikarabad district on Sunday afternoon.
According to the information, the ill-fated aircraft left Begumpet airport and crashed in the cotton fields in Sultanpur killing Prakash Vishal and another trainee pilot of Rajiv Gandhi Aviation Academy. Officials of district administration, police and aviation academy rushed to the spot. The crash is suspected to have occurred due to bad weather.