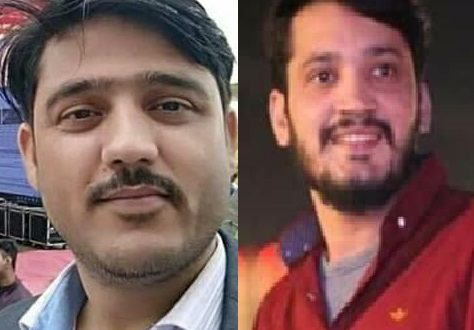 KARACHI: Two more Shia journalist have forcibly kidnapped by secret security agencies on specific directions of the federal government during the last five days in Karachi.

According to sources Matloob Hussain Moosavi of Daily Jang (a largely circulated Urdu newspaper) and Syed Ali Mubasshir Naqvi of Abb Takk News (a private TV channel) were abducted from their homes on March 30 and April 01 respectively but neither the police nor any Law Enforcing Agency (LEA) know about their whereabouts while neither the provincial nor federal government is ready to take any action against abductees hence, neither the Karachi Press Club (KPC) nor Karachi Union of Journalists (KUJ), Pakistan Federal Union of Journalists (PFUJ) or any other journalistic organization, group, or human rights association have called for the recovery of both journalists even issued a formal statement in this regard except the KPC which just subjected the matter because Moosavi was a member of them.

Sources also claimed neither any newspaper nor news channel is allowed to publish or on-air any news regarding the kidnapping of both journalists otherwise not only the concerned Reporter but also the News Head would be kidnapped too like others those have already been disappeared in past.

The families and friends of the abducted journalists are extremely anxious and worried about their dear and near ones but they are also much feared about the safety and life protection while the LEAs have already been directed them to keep their mouth shut otherwise not only the life of abductees would be ended but they would have to face severe consequences and they may also book in false terror cases as the agencies are doing since a long.

It is worth mentioned here for the record and info of all authorities of Pakistan as well as all national, regional and international organizations, unions and associations those work for journalists that the targeted killing and kidnapping of Shia journalists have not only become the routine but this issue is also increasing day by day especially since the formation of Imran government.

This correspondent has already been clearly warned as ‘he’ cautioned many times earlier that if the news of said journalist’s abduction would be published; the said correspondent would immediately be taken into custody of LEAs as the government has already authorized them to do so but this correspondent is filing this report to the international media for publishing and on-airing this news while ‘he’ also owns all contents of this news as ‘his’ previous hundreds of news those at last proved correct word by word