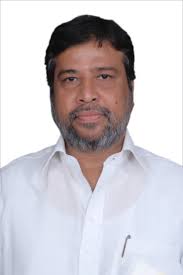 Sangareddy, Oct 8 : Former Deputy Chief Minister Damodara Raja Narasimha has alleged that the Telangana State, which was achieved with the sacrifices of youth and students,  has become a captive in the hands of a single family.

Participating in the ‘journalists deeksha’ here on Monday, Raja Narasimha has said that  achievement of separate Telangana state could be  justified only if the government’s welfare scheme  fruits reached  the poor. He alleged that the TRS government deceived the  journalists after showering several assurances to them. He said that the Congress party was contemplating to allocate house sites besides setting up corpus fund in bank,  for the sake of journalists’ welfare. He said that they will reveal the issues in regard to journalists in  the Congress party manifesto very soon.