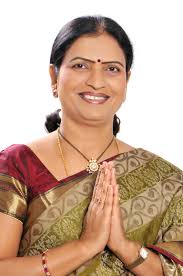 Hyderabad,  Congress leader and former minister DK Aruna today slammed “inexperienced” IT Minister KT Ramarao for speaking ill of Congress leaders and prophesied that TRS will not come back to power in the 2019 elections despite its best efforts.
Speaking at the Assembly media point here on Thursday, Aruna asked KTR whether he would stick to his word that he would take ‘political sanyas’ if  Congress comes to power in 2019 elections. She reiterated that the Congress laid foundation to Thummilla project.
Reminding KTR’s statement that Gadwal meeting was TRS party’s ‘victory yatra’, Aruna said it was TRS party’s ‘defeat yatra’. She also asked the TRS government to complete the projects and release a white paper on the funds spent on them till date. She exuded confid.

2018-02-01
admin
Previous Ponguleti’s counter-challenge to KTR
Next Conference for women on “Triple Talaq & reforms in society” in old city on Feb. 4