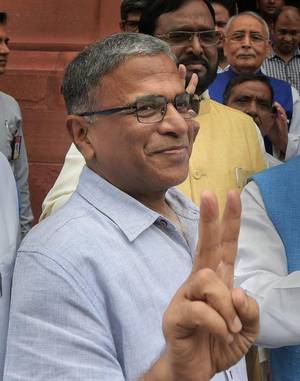 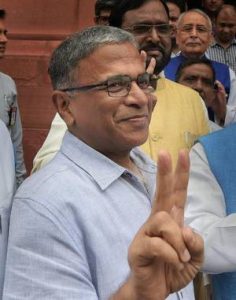 Hyderabad, Aug.9 (PMI): All the six TRS members in Rajya Sabha on Thursday voted in favour of JD(U) member Harivansh Narayan Singh in the prestigious election for the post of the Deputy Chairman of the Upper House of parliament and thus felicitated the victory of the NDA-sponsored nominee over the UPA-sponsored Congress nominee B.K. Hariprasad by 125 to 105 votes.
As expected the TDP, which has taken cudgels against the BJP by severing its ties with the NDA Government on the issue of Special Category Status to Andhra Pradesh, once again showed its ire by voting against the NDA nominee. The party members voted in favour of the UPA-sponsored Congress nominee. The two members of the YSRCP as already announced abstained from voting.
The election of Deputy Chairman of Rajya Sabha was, as a matter of fact, considered as a testing ground for both the BJP-led NDA and Congress-led UPA in the run up to the 2019 elections. As such the Congress, for the first time under the leadership of Rahul Gandhi, went all out to forge an opposition unity to checkmate the Narendra Modi-Amit Shah game plan for the coming elections by defeating the JD(U) member Harivansh Narayan Singh. However the efforts not only boomeranged but it also exposed the disunity among the opposition parties.
It is pertinent to note here that the TRS by voting in favour of the NDA-sponsored JD(U) nominee also amplified the strong anti-Congress stance of Chief Minister K. Chandrasekhara Rao. Though the party has not made its stand clear till few days back regarding its support to the JD(U), the Chief Minister of Bihar Nitish Kumar contacted KCR and sought his support for the party’s nominee Harivansh. In fact even the BJP leadership was in touch with the TRS leadership for supporting the JD(U) candidate.
Since the Deputy Chairman’s election has become a prestigious issue for both the BJP and Congress, political interests electrified all over the country and thus all eyes were focussed on today’s voting. When Rajya Sabha Chairman M. Venkaiah Naidu announced the process of the elections for the Deputy Chairman’s post, it was first put to voice vote. When there was a demand for division, the voting was done through electronic voting system. In the beginning when the members voted, the electronic voting display board showed 115 members in favour of the JD(U) candidate, 89 against and two absentees. Since some members expressed that they could not vote because of some confusion, the Chairman announced redoing of the voting process for a second time. After completion of the process, he announced the results as 125 in favour of JD(U) candidate, 105 against and two absentees. Thus Harivansh Singh was declared elected by a majority of 20 votes against the Congress nominee Hariprasad.
It is also interesting to point out here that the Union Finance Minister and leader of the House Arun Jailtley, who has been ailing for sometime and recuperating, attended the House to take part in today’s election. Also Prime Minister Nendra Modi, who was in the Lok Sabha, entered the Upper House even as the newly elected Deputy Chairman was escorted to his seat by Leader of the Opposition Gulam Nabi Azad, Arun Jaitley and others. The PM walked up to the seat of the Deputy Chairman, shook hands and congratulated him.
Later Gulam Nabi Azad, Narendra Modi, Arun Jailtely and members from both sides spoke congratulating Haivansh, a seasoned journalist and first time Rajya Sabha member. Interestingly, Harivansh was also connected with Hyderabad as he had brief stint working in the RBI here. (PMI).