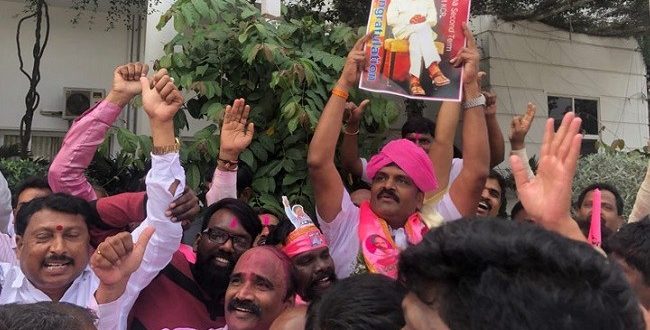 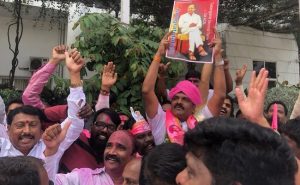 Hyderabad,  : Continuing its victory spree, the ruling Telangana Rashtra Samithi (TRS) on Saturday made a clean sweep of elections for the posts of Zilla Parishad chairpersons and vice-chairpersons.

The TRS bagged the posts of Zilla Parishad (ZP) chairpersons and vice-chairpersons in all 32 districts, setting off celebrations among party cadres across the state.

Barring Hyderabad, the rural local body elections were held in all the districts in three phases last month.

Chief Minister K. Chandrashekhar Rao greeted MPTC, ZPTC members, and MPP and ZP presidents who were victorious in an “unprecedented and grand manner”. In a message, the TRS chief thanked the party activists responsible for the “great victory”.

Rao also thanked people and voters for giving such a big victory and described it as the victory of the people.

Opposition Congress, BJP and other parties drew a blank in ZP chairpersons and vice-chairpersons polls.

In MPP presidents’ elections on Friday, TRS won 449 out of 507 seats. Congress bagged 61 MPP president posts while BJP could win just eight seats. Others won 14 seats. Elections were postponed in a few places.

TRS, which received a setback as the BJP and Congress prevented it from making a clean sweep in the recent Lok Sabha election, has bounced back with the huge victory in rural local body polls.

TRS won nine out of 17 Lok Sabha seats but BJP (4) and Congress (3) spoiled its plans for a clean sweep along with its ally All Indian Majlis-e-Ittehadul Muslimeen (AIMIM), which retained the Hyderabad sea