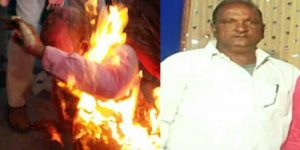 Hyderabad : Vikarabad  TRS activist Ayub Khan, who set himself afire on August 30 in the presence of Transport Minister Mahendar Reddy in protest against the party leaders not giving recognition to those who plunged into separate State movement, died at the Apollo Hospital on Friday.

It may be mentioned here that Ayub Khan immolated himself in protest against not being given a nominated post in the TRS Government. He resorted to the extreme act during a TRS party workers meeting at Vikarabad on August 30. He had said he vainly pleaded his case with several leaders, including Nizamabad MP Kavitha, for a nominated post. After ending his speech, Ayub Khan doused himself with petrol and set himself ablaze. The shocked party workers put out the fire and shifted him to a hospital. But he succumbed to severe burn injuries in Apollo Hospital on Friday.

Minister Mahender Reddy rushed to the hospital and paid tributes to the departed leader. He assured to provide all assistance to the family members of Ayub Khan.