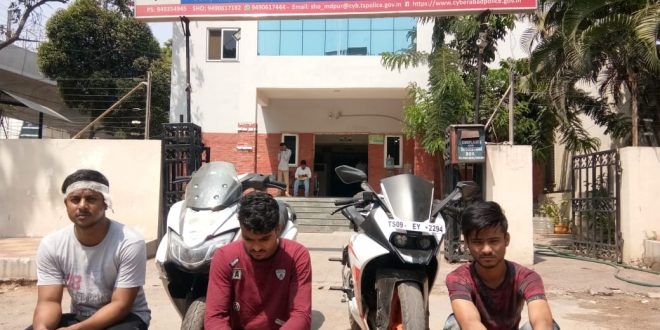 HISTORY OF THE ACCUSED PERSONS:

The accused persons hails from the Hasmathpet of Bowenpally and Nallagutta of Secunderabad respectively and they are dropouts of the schoolings. Later they started working as house shifting labour and band master. Since their income was less and not sufficient to satisfy their needs, luxuries life, alcohol and other bad hats, they decided to commit snatching of cell phones, gold chains and motor bikes in remote areas. Since 2016 they have been committing offences.

The accused persons hatched a plan and go to the offence place usually by public transport and other mode, after reaching the area they used to theft the parked power motor bikes in busy areas and commit robberies by snatching gold chains and cell phones with them. After committing the offence, the offenders abandoned the crime vehicles in the locality and fled away from the area.

Sl. No. Details of the recovered property

Tips to prevent chain snatchings:1.     Be alert and aware, pay full attention to who is around you when you are in public place.2. Avoid displaying and carrying large sums of valuable jewelry in public.3.   At night avoid taking shortcuts through deserted areas such as parks, playgrounds, vacant lots4.  Do not allow stranger to follow you to, if feel threatened go to public place and call the Police.5.         Travel on well lighted and busy routes6.        Women should avoid talking on mobile phones while walking on the road to prevent chain snatchings.7.   Avoid wearing flashy, shows jewelry. If you have to keep it cover with a scarf, dupatta or saree.

8.         If you are going to attend a marriage or a social function ensure that you are escorted.9.    In case of your Jewelry is snatched raise an alarm and try to attract the attention of others.Approach Cyberabad city Police through 100 dial, Whatsapp-9490617444, Cyberabad City Police Facebook and Hawk eye App.                Due to the active efforts made by Sri. Y. Prakash Reddy, DI of police, P.S. Madhapur, Sri. Y. Nageshwar Rao, SHO, Madhapur PS, Sri. K. Manmadha Rao, DSI of Police, P.S. Madhapur and crime staff under the supervision of Sri. N. Shyam Prasad Rao, Asst. Commissioner of Police, Madhapur Division nabbed the above accused and recovered the above robbed and stolen property and they are being produced before the Hon’ble Court.

The efforts of the above officers and staff are highly appreciated and proposals are being forwarded to CP, Cyberabad for suitable rewarding them