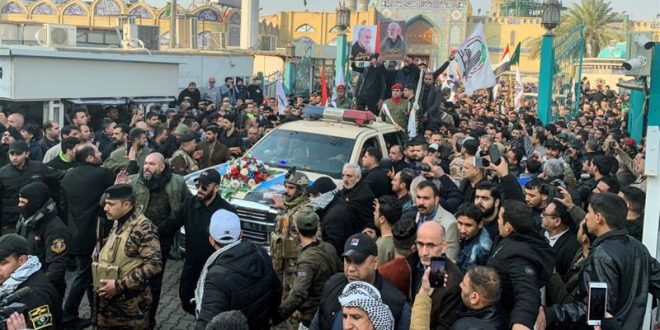 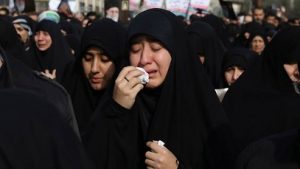 BAGHDAD/ TEHRAN/ WASHINGTON: Thousands of mourners gathered Saturday for a funeral procession through Baghdad for Iran’s top general and Iraqi militant leaders killed in a US airstrike that has caused regional tensions to soar.

Gen. Qassem Soleimani, the head of Iran’s elite Quds force and mastermind of its regional security strategy, was killed in an airstrike early Friday near the Iraqi capital’s international airport.

Soleimani was the architect of Iran’s regional policy of mobilizing militias across Iraq, Syria and Lebanon, including in the war against the Islamic State group. He was also blamed for attacks on U.S. troops and American allies going back to the 2003 invasion of Iraq. 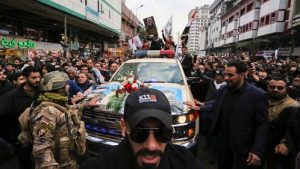 Many of the mourners were dressed in black, and they carried Iraqi flags and the flags of Iran-backed militias that are fiercely loyal to Soleimani. They were also mourning Abu Mahdi al-Muhandis, a senior Iraqi militia commander who was killed in the same strike.

The procession began at the Imam Kadhim shrine in Baghdad, one of the most revered sites in Shiite Islam. Mourners marched in the streets alongside militia vehicles in a solemn procession.

Iraq, which is closely allied with both Washington and Tehran, condemned the airstrike that killed Soleimani and called it an attack on its national sovereignty. Parliament is to meet for an emergency session Sunday, and the government has come under mounting 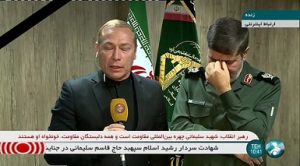 pressure to expel the 5,200 American troops based in the country, who are there to help prevent a resurgence of the Islamic State group.

The U.S. has ordered all of its citizens to leave Iraq and has closed its embassy in Baghdad, where Iran-backed militiamen and their supporters staged two days of violent protests earlier this week in which they breached the compound.

No one was hurt in the protests, which came in response to U.S. airstrikes that killed 25 Iran-backed militiamen in Iraq and Syria. The U.S. said the strikes were in response to a rocket attack that killed a U.S. contractor in northern Iraq, which Washington blamed on the militias.

The killing of Soleimani comes after months of rising tensions 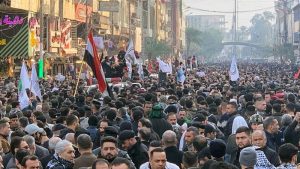 between the U.S. and Iran stemming from Trump’s decision to withdraw from the 2015 nuclear deal and restore crippling sanctions.

The administration’s “maximum pressure” campaign has led Iran to openly abandon commitments under the deal. The U.S. has also blamed Iran for a wave of increasingly provocative attacks in the region, including the sabotage of oil tankers in the Persian Gulf and an attack on Saudi Arabia’s oil infrastructure in September that temporarily halved its production.

In Iran on Saturday, every major newspaper and state-controlled TV broadcast focused on Soleimani’s death, with even reformist newspapers like Aftab-e Yazd warning that “revenge is on the way.” 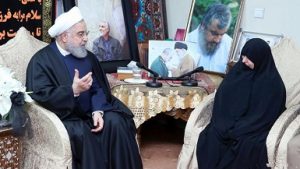 In the hard-line Kayhan newspaper, editor-in-chief Hossein Shariatmadari wrote Saturday that Iran shouldn’t hesitate to retaliate. He criticized an earlier statement by the country’s Supreme National Security Council saying an attack would come at the “right place and right time.”

“America and its allies are sitting in a glass room and are vulnerable on every side, so we can say for sure that all the preparations are ready for harsh revenge on terrorist America,” wrote Shariatmadari, who was appointed by Khamenei.

The “glass room” comment may refer to the United Arab Emirates, home to the skyscraper-studded city Dubai, which Kayhan previously has warned was a target for Iranian-backed forces. The UAE also hosts some 5,000 American troops at Abu Dhabi’s Al-Dhafra Air Base. Dubai’s Jebel Ali port is the U.S. Navy’s busiest port of call outside of the U.S.