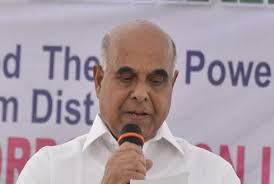 Hyderabad,  “For the first time in the history, 24-hour power was being supplied from January 1 to 23 lakh agricultural pump sets in Telangana State. Telangana is the only State in the country to achieve this distinction to end the despair of farmers. For this feat, the credit goes to team work of power sector”, said TSGENCO & TSTRANSCO CMD D. Prabhakar Rao here today.
Prabhakar Rao was speaking after hoisting the national flag at Vidyut Soudha on the occasion of 69th Republic Day. He said in order to enhance energy security and to mitigate the adverse environmental impacts from road transport vehicles, the State Government was planning to release Telangana State Electric Vehicle Policy. The TS Power Utilities are fully geared up to supply the required bulk power to the charging agencies as well as to retail consumers. A separate consumer category will be created for these charging agencies in the Retail Supply Tariff Order in consultation with the TSERC.
To make the State self sufficient in Power, the TSGENCO has grounded Projects totalling 5880 MW at Manuguru (4×270 MW), Kothagudem (1×800 MW) and Damerachela (5×800 MW) with an investment of Rs.37,938 Crores. The KTPS VII stage (800MW) works are going on war footing and expected to be synchronized by March, 2018. The initiative of Government to develop power through public sector has received appreciation from all over the country, he said.
TSTRANSCO has commissioned total 68 EHV Substations (5Nos. 400 KV, 22 Nos. 220KV and 41 Nos. 132 KV Sub Stations) and 4,913 circuit kilo-meters of transmission network (2169 CKM of 400 KV, 1361 CKM of 220KV and 1383 KM of 132 KV) has been added during the last three and half years. Definitely it is a great task indeed. The State grid has met a peak demand of 9,500 MW with a record consumption of 198 MU on 13th September 2017 and utilities are fully geared up to meet load up to 11000 MW in coming seasons.
Telangana State has taken major initiative in promoting Green Power through proclamation of “Telangana State Solar Policy-2015”, which is appreciated as the best one in the Country. Telangana Utilities have implemented a unique distributed generation model for adding Solar Capacity, which is being adopted by other states also. Solar capacity at the time of State Formation was 30 MW only. Presently, Telangana has got the highest installed solar capacity of 3090 MW and stands number one in the county.
On this occasion, CMD said that discharging the assigned duties by extending the value added services to the electricity consumers is also a way to express our love &amp; solidarity to the country and appealed to all employees to rededicate for the betterment of power sector by following strict discipline which shall take the sector to new heights with ultimate consumer satisfaction as the goal, he added.
TS Transco JMD C. Srinivasa Rao, Directors G. Narsing Rao, T. Jagath Reddy, J. Surya Prakash, Directors of TSGENCO C. Radha Krishna, M. Sachidanandam, Ch. Venkata Rajam, S. Ashok Kumar and Lalith Kumar participated in the function.