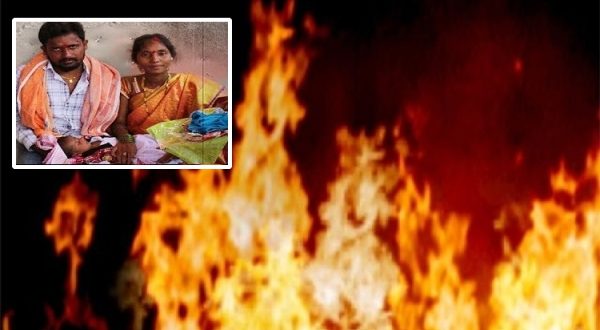 Hyderabad: A 27-year-old man Ramesh was arrested for allegedly killing his wife Susrutha and later setting her and their two-month-old baby boy on fire near Kondapur near Hyderabad limits following an argument, police said Sunday.

The matter came to light this morning after some villagers of Kondapur found two charred bodies in a plot layout and alerted the police, they said.

Preliminary inquiry revealed that the accused had married the woman in 2015 and it was an inter caste marriage which opposed by the accused parents. After the interventions of a social organisation they got married and were staying in Hyderabad. Susrutha had baby boy and was living with her parents for the past few months after differences cropped up between them.Meanwhile, the woman on Saturday evening met her husband and both had gone to Ghatkesar, where they had a tiff, following which she consumed sleeping pills and also fed the powder of a pill to the infant, police said.

Later, the accused took them to Prabhakar Enclave, a vacant plot near Kondapur and throttled both of them ,put their bodies on a heap of sticks, poured petrol on them and set them ablaze. He later came and surrendered at the Ghatkesar police station and confessed to his crime. Since the bodies were charred beyond recognition , police need to ascertain whether she really tool the pills and if this was a pre-planned murder by Ramesh. Meanwhile Susrutha’s family are asking for justice as she was earlier tortured by Ramesh and that these was pre meditated murder considering that he had taken them to an isolated spot for talking to her