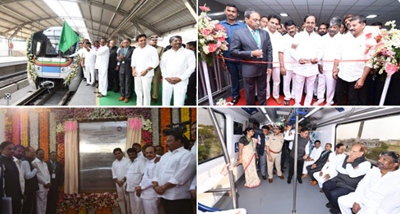 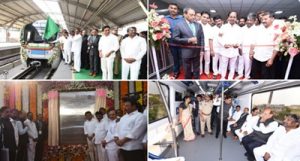 The world’s largest public-private partnership, the Hyderabad Metro Rail is now the second largest operational metro network in the country covering 69.2 km. “As builders of nations, we are proud to be doing the projects that make India proud and the iconic Hyderabad Metro Rail project ranks among one of most prestigious projects that we have executed,” said S N Subrahmanyan,  CEO & Managing Director, Larsen & Toubro.

K V B Reddy, MD & CEO, L&TMRHL stated, “It is indeed a proud moment for all Hyderabad is that our Chief Minister K. Chandrashekar Rao has inaugurated the JBS Parade Ground Station to MGBS Station, Hyderabad Metro Rail stretch of Corridor II – Green Line. L&T Metro Rail Ltd. is thankful to the CM for dedicating this stretch to the citizens of Hyderabad today that makes Hyderabad Metro Rail the second largest operational metro network in the country. L&T is proud to have created a best-in-class, eco-friendly urban mobility system for the people of Hyderabad to global benchmarks to enhance commuter safety and comfort and reduce travel time. It is an engineering marvel to construct which we have utilized cutting edge technologies like Communication Based Train Controls (CBTC), Regenerative Rolling Stocks, etc., I take this opportunity to thank the Government of Telangana State, HMRL, employees, stakeholders and most importantly the patrons of Hyderabad Metro Rail. Our endeavour has been and will be to provide world class metro rail services in Hyderabad.”

JBS Parade Ground metro station is in a secured area next to Hyderabad’s second largest bus terminus and is one of the tallest in the project with five levels. It has been designed as a portal frame type RCC structure with columns on either side of the road and one in the central median with enough entries and exists. A skywalk connects it to the Parade Grounds Station (Interchange) of Corridor III.

Spread over 3 lakh square feet, Mahatma Gandhi Bus Station (MGBS) Interchange metro station is one of the largest in the country with several special features. Uniquely built, it houses the interchange between Corridors I & II with three levels with each, again split into two, as one corridor passes over the other. All the passenger friendly facilities are seamlessly integrated to enable easy and smooth transit from one corridor to the other