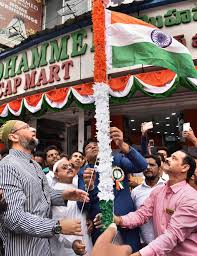 Hyderabad, Dec.22 (PMI): Telangana Auto Drivers JAC today welcomed the advice of AIMIM president Asaduddin Owaisi to fly national flag at every home in protest against the CAA and NRC.
In a joint press statement here today, TADJAC leaders Mohd Amanullah Khan, K. Laxminarsaiah, M.A. Saleem, Maruti Rao Jagtap, Shaik Ahmed and Mirza Rafatullah Baig said as Owaisi pointed out that the Indian flag will send a message to the BJP government at the Centre and it was going to be our way forward to fight the draconian Act.  Flying the tricolour would send out the message that the thoughts of the national leaders are still alive. The country was not of Gowalkar but of Mahatma Gandhi, B R Ambedkar and Azad.
“We rejected the offer of Jinnah to come to Pakistan and decided to live in India. We are Indians by choice and by birth even after 70 years. The TADJAC leaders said all the sections in the society should come together and fight against the CAA and NRC and teach a fitting lesson to the BJP government, which was provoking the people by its “irresponsible” acts and deeds.  They also welcomed Owaisi’s advice to continue fight against CAA and NRC peacefully without giving any room for violence.