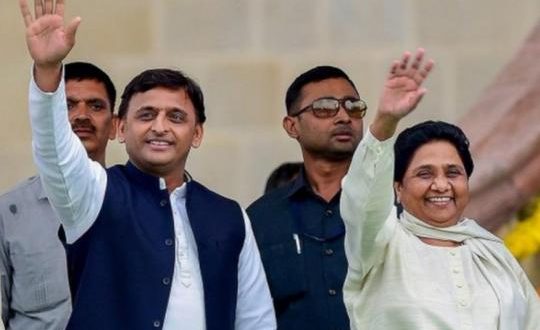 Lucknow: The Samajwadi Party on Saturday confirmed that it has entered into an alliance with the Bahujan Samaj Party in Uttar Pradesh for the 2019 general elections.

News18 had on Friday reported that Mayawati and Akhilesh had sealed the alliance in a three-hour marathon meet in New Delhi and agreed on a seat-sharing formula as well.

SP’s national spokesperson Rajendra Chaudhary said that a formal announcement on the gathbandhan between the two Uttar Pradesh-based parties is likely later this month and the two party chiefs had given their “in-principle approval” to joining hands to take on the BJP.

The two leaders also met on Friday, he said, adding that talks are also on with other “smaller” parties to strengthen the alliance, but remained silent when asked whether Congress would be a part of the grand coalition or not.

Sources had told News18 that both SP and BSP are planning to contest on 37 seats each out of the 80 on offer in Uttar Pradesh and plan to leave just two – Rae Bareli and Amethi- the bastions of Sonia and Rahul Gandhi for the Congress, an offer that the grand old party is unlikely to accept. Chaudhary said that the alliance won’t field candidates on these two seats.

Signs already point towards the Congress going solo in the most crucial electoral state, with the Congress with the party’s Rajya Sabha MP saying on Saturday that his party was preparing to contest alone.

“A coalition is not important… Our workers are ready… We have not spoken to anyone about an alliance,” he said.

When Chaudhary was asked about the possible inclusion of Congress in the UP alliance, he said, “This will be decided by Akhilesh Yadav and Mayawati.

Akhilesh’s uncle and close aide Ram Gopal Yadav also all but confirmed that Congress will not be a part of the coalition with his statement on being asked about the Congress’ inclusion.

Chaudhary, meanwhile, admitted that the Rashtriya Lok Dal (RLD), which has a presence in western UP, is among these parties in talks with SP and SP.

The two remaining seats have been reserved for other partners of the mahagathbandhan in the state and could go to sulking BJP ally Om Prakash Rajbhar’s Suheldev Bharatiya Samaj Party. Rajbhar is presently a minister in the Yogi Adityanath cabinet but had constantly been criticising his own government and the BJP.

According to BJP’s own calculations, an SP-BSP alliance may cost the party at least 25-30 seats in the state in the general elections. The BJP and its allies had won 73 of the 80 seats in the 2014 parliamentary elections.

The mahagathbandhan arithmetic had worked in the bypolls as a consolidation of OBC, Dalit and Muslim votes powered joint opposition candidates to victory in Gorakhpur, Phulpur and Kairana last year.