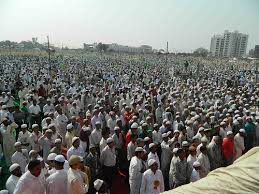 Shia Community Ulema, Zakreen and Political leaders Should Abide by the Shia Ithna Ashari Ideology While Representing the Community

The community is lacking a central political leadership to represent its issues on the Governmental forums and political influence. Splinter groups represented by leaders with vested interest and ambitions have diminished the political voice and strength of the community. The political parties play with the community with their divided house pitting them against each other thus diluting their strength and say in the political arena.

On the other hand, the religious leadership has completely failed to take up the issues that are being faced by the community members in the governmental and political sphere. Instead of asking for community representation in various levels of the political committees and government bodies, they are seen putting up their own candidature for certain posts and doing sycophancy for promoting their own profiles instead of community issues.

Since last two years the Shia Muslims are watching the speech of a priest (Alim) who is representing the Shia Itna Ashari community at various religious and inter sect meetings and also representing the community on political platforms. In the opinion of the youth the priest is expected to deliver the speech according to the teachings of Ahlelbait (A.S) and present the views of the community on the life and teachings of Prophet Mohammed (S.A.W.S). In contradiction, he started with the introductory speech on the Life and Teachings of Prophet Mohammed (S.A.W.S) and deviated in heaping praise in respect to the political leaders who invited him, naturally the political leaders who had invited him has not asked him to delivered such a speech in their favor, but to gain something from the political leaders he delivered the Fazael (praise) of political leaders in his speech. This has paved the way for him to gain post in Government Bodies representing the Shia Muslims. The Shia Muslims are not against to deliver the speech in favor of political leaders or parties, but it should not be delivered from religious platforms particularly when you are invited to represent the Shia community.

In the 1400 years of Shia history the Ulema and Zakereenrn had never compromised in representing the Shia ideology. They have sacrificed their whole life, some of them their family members and spend their whole life in poverty while safeguarding the principles and ideology taught by the Ahlelbait (A.S) which is based on Quran and Sunnat of Prophet Mohammed (S.A.W.S). They have never bowed to the Monarchies or center of power even though they were offered worldly position or mammon.

As a writer I know that truth is bitter, many people may not like what I have written, but it reverberate the voice of Shia Muslims. The community people have to come out of the clutches of the sycophant leaders and Ulema and thus this has compelled me to write this article. I am aware that I will be vilified from the pulpits and stages but there should be someone who has to show mirror and try to explain the gravity of the problem facing the community. (Press Media of India)