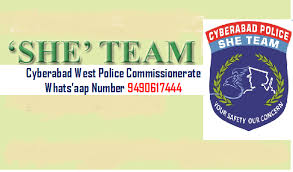 SHE Teams Receive 190 Complaints From Victims

Hyderabad, Dec.12 (PMI): In the month of November, 11 SHE Teams of Cyberabad received 190 complaints from women victims through Whatsapp, mail, Hawkeye, direct walk in and so on.  Of them, 67 cases have been registered, including 20 criminal cases and 47 petty cases.

The SHE Teams conducted 279 decoy operations at various places like bus stops, shopping malls, railway stations, tutorials, colleges and so on. They also conducted 164 awareness programs and 32, 800 people were addressed. Counselling session was held on November 7 and 22 and all eve-teasers attended the session at the Commissioner’s office, Gachibowli. The accused were counseled by professional counsellors from the Bharosa centre, Cyberabad and children by professional psychologist.

They received a petition through Whatsapp from a woman of Kondapur stating that while she was walking to her hotel, her ex-colleague and his friends started stalking her using vulgar language and caught her hand, misbehaved and threatened to abduct her. After the incident, the complainant approached SHE Team, which collected details and caught the accused and registered a case against him at Gachibowli PS and sent him for judicial custody.

In another case, the SHE Team received petition through Balamithra School teacher stating that one of her students informed her that her science teacher was showing sexually explicit videos in his phone to them saying it was part of the subject and touching them inappropriately. When complained, the SHE Team caught the accused and and he was removed from the school.

In another incident, a neighbour showed sexually explicit videos to a school girl. While team members were conducting awareness program in the school at Venkatapuram, a Class VI student aged 11 years complained that her neighbour daily comes to her house and shows abusing videos in his phone and touching her improperly. The SHE team went to the victim’s house and conducted a decoy operation and caught him and prosecuted.

An auto-driver, who misbehaved with a woman at Madhapur, was caught and punished for abusing her in filthy language for refusing to sit beside him in the auto. In the last four weeks , a total 47 eve-teasers were caught by Cyberabad SHE teams in decoy operations and through Whatsapp complaints from different areas of Cyberabad while they are teasing girls at Metro train/junctions/Bus stops/Working Places and colleges. All were booked and counseled by professional counselors. Minors were counseled by Clinical Psychologist.

Cyberabad Police Commissioner V.C. Sajjanar, IPS, appreciated the good work done by the SHE teams and appealed to the women/girls to approach Cyberabad SHE Teams through Cyberabad whatsapp number 9490617444 or Dial 100 whenever they are facing eve teasing / Sexual harassment.