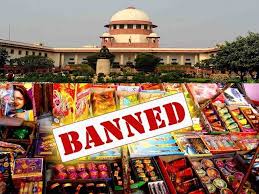 SC refuses to relax ban on sale of firecrackers in Delhi, NCR

Supreme Court today refused to relax the ban on the sale of firecrackers in Delhi NCR and has directed Delhi Police to implement its order banning the sale of firecrackers.
The apex Court was hearing today the traders’ plea seeking modification of its October 9 order banning sale of firecrackers in Delhi and national capital region (NCR) till 31st of this month.
The Supreme Court, however, said today that people will burst firecrackers which they have purchased before its order banning the sale.
The apex court also expressed pain over certain people trying to give its order a political colour, after advocate Prashant Bhushan, appearing for one of the parties, referred to certain statements made by some political leaders.
2017-10-13
admin
Previous Supreme Court refers ban on women’s entry at Sabarimala to constitution bench
Next Apex Court Dismisses Plea for Ban on Ilaiah’s Book—Freedom of Expression