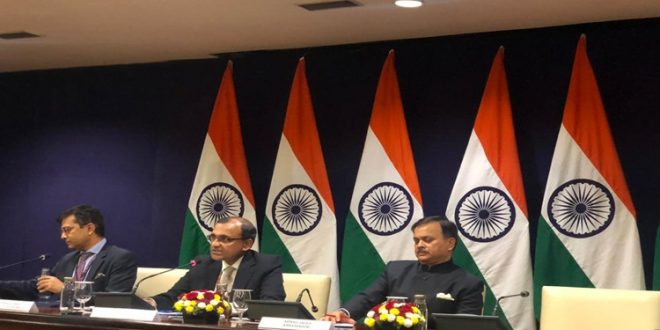 Saudi Arabia will invest 100 billion dollars in India in range of areas including energy, refining, petrochemicals, infrastructure, agriculture and manufacturing.

Briefing media Wednesday in New Delhi on the visit of Crown Prince of Saudi Arabia, Secretary (Economic Relations) in the Ministry of External Affairs T S Tirumurti said, it is a clear reflection of the confidence of Saudi Arabia in the vibrancy of Indian economy and the tremendous opportunities available in India for investment.

He said, the two sides expressed satisfaction at the positive trend in the bilateral ties and stressed on the need to tap the untapped potential in trade particularly in Non-Oil trade.

Mr Tirumurti said, the two leaders condemned in the strongest terms the recent terror attack in Pulwama. He said, the complicity of Pakistan in Pulwama terror attack was very much underlined during talks between Prime Minister Narendra Modi and the Crown Prince.

He said, both leaders called on all states to reject the use of terrorism against other countries, dismantle terrorist infrastructure, cut off any kind of support and financing to terrorists and bring perpetrators to justice.

Both leaders called upon all countries to renounce the use of terrorism as an instrument of state policy.

He said, the Prime Minister and Crown Prince Mohammad Bin Salman bin Abdulaziz Al Saud underlined the importance of comprehensive sanctioning of terrorists and terror organisations by the United Nations.

Mr Tirumurti informed that to enhance cooperation in counter-terrorism efforts, including intelligence sharing,  the two countries will start a comprehensive security dialogue at the level of national security advisors. A joint working group on counter-terrorism will also be set up.

Replying to a media query, Mr Tirumurti said no mediation was offered from the Saudi side to defuse tensions between India and Pakistan.

Mr Tirumurti said, India also raised the matter of Indian prisoners lodged in Saudi Arabian jails and received a positive response on the matter from the Saudi side.