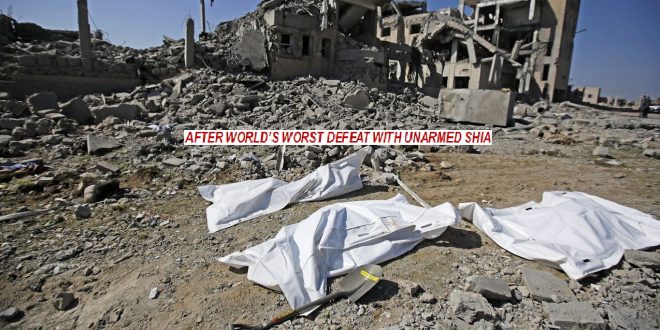 Saudi Arabia seeks exist in Yemen as US from Afghanistan

RIYADH/ SANA’A/ WASHINGTON/ ISLAMABAD/ KABUL: After killing of millions of innocent and unarmed people mostly Shia Muslims including women and children and harsh committed war and other crimes together with slaughtering, kidnapping, abducting, torturing, burring alive and raping thousands of Shia and pro-Shia Muslims in Iraq, Yemen, Syria, Bahrain, Afghanistan, Pakistan and many other Arab and Gulf countries, now, the rulers of Kingdom of Saudi Arabia (KSA) are seeking a safe exit for its soldiers as well as Saudi-led coalition army from Yemen like the United State of America (USA), North Atlantic Treaty Organization (NATO), International Security Assistance Force (ISAF) and UNO are still being tried to leave from Afghanistan after world’s worst defeat, sources told Press Media of India (PMI). 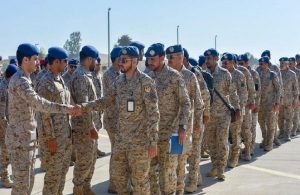 Sources further claim that on the basis of historical exclusive reporting of India’s PMI and Pakistan’s Messenger as well as the effects of said reporting in war zones through hardcopies of news after printing and extraordinary pressure on soldiers, local resisters, Houthis and general people plus political, social and religious pundits, the entire atmosphere become change while the comprehensive defend of Western one-sided media and European and American propaganda, American in Afghanistan and KSA in Yemen, Iraq, Bahrain and other countries now want to return immediately otherwise they wouldn’t be able to face more in world because the social media will not them independent, sources added.

Sources firmed that the Saudi Arabia-led alliance’s military intervention in Yemen has not only failed in its objective to rout the Houthi rebels, but the kingdom finds itself in a position in which it might be forced to capitulate. 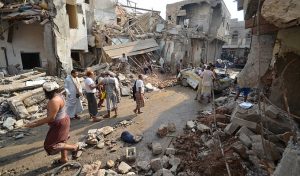 Saudi Arabia has failed its primary objectives of defeating the Houthis and reestablishing the internationally recognised government in Yemen.

“The Houthis have proven to be a formidable fighting force. Saudi Arabia does not have a comparable ground game that can match their adversaries’,” Nader Hashemi, director of the Center for Middle East Studies at the University of Denver, told media.

This reality is far from what Saudi Arabia had initially anticipated when it entered into the war via Operation Decisive Storm in March 2015.

“Saudi Arabia thought it would win this war via a bombing campaign, and it would all be over in a few weeks. We have now entered the seventh year of this war with no clear end in sight,” Hashemi said.

In fact, the Houthis have been on the advance ever since, and Saudi Arabia is in a position where it is implausible to become the war’s victor. The Houthis control the capital Sana’a and large parts of Yemen’s northwest. 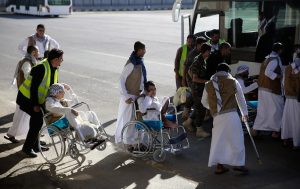 The city of Marib, which is of pivotal strategic importance as it functions as the country’s oil and gas production hub and possesses crucial infrastructure, is also constantly under attack.

Besides these territorial gains, the Houthis have also repeatedly shown they can attack infrastructure in Saudi territory with drones.

The conflict’s status quo puts the latest Saudi call for peace into perspective. It is not driven by the desire to create lasting peace but rather by the attempt to define an exit strategy from a conflict that has turned into a quagmire for the kingdom.

The proposal the Saudis suggest envisages a nationwide ceasefire under the supervision of the United Nations, according to Saudi Foreign Minister Prince Faisal bin Farhan Al Saud.

During the ceasefire, negotiations should facilitate a political solution. As a token of goodwill, Saudi Arabia offered to lift its blockade of Sanaa airport and allow imports of fuel and food via the critical port of Hodeidah on the Red Sea. 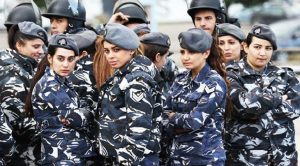 However, Houthi rebels are well aware of their current position and leverage. As it stands, Saudi Arabia and its allies could potentially be forced to withdraw without the Houthis having to make any concessions. Hence, their initial rejection of the proposal did not come as a surprise, particularly as it offered “nothing new”.

The latter is an accurate statement, according to Steven Hurst, department head of history, politics and philosophy at the Manchester Metropolitan University.

“The peace plan they have put forward now is a revised version of one they advanced in 2020 rather than anything new,” said Hurst.

Nonetheless, the Houthis’ chief negotiator, Mohammed Abdulsalam, stated his willingness for further talks with Riyadh, Washington, and Muscat to facilitate a peace agreement.

The Houthis’ strong military position is not the only conundrum for Saudi Arabia, however. 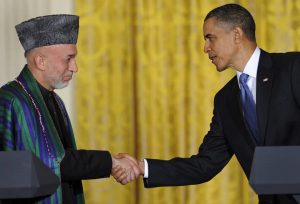 The United States, Saudi Arabia’s most important ally for more than half a century, also played a pivotal role since March 2015 when then-President Barack Obama authorized US forces to provide logistical and intelligence support to the Saudis, Hurst said.

“The US provided the Saudis with weaponry, intelligence including assisting with target selection and logistics such as mid-air refueling of Saudi planes, though the latter was ended in late 2018,” he noted.

Donald Trump presented Saudi Arabia with carte blanche for its operation in Yemen during his presidency.

“That desire in turn reflected a range of factors including Trump’s well-established admiration for ‘strong-man’ rulers, the Saudi willingness to go along with Trump’s one-sided approach to the Israeli-Palestinian peace process, and a mutual antipathy toward Iran.” 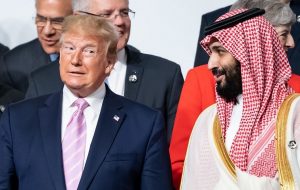 As a result, the Trump administration even vetoed a bipartisan congressional resolution that would have ceased US involvement in the war in 2019.

President Joe Biden ceased the US’s support for the war soon after his inauguration on January 20. Under his leadership, the country will end “all relevant arms sales” to Saudi Arabia.

It marked a solid start of the new administration and confirmed the hopes many put in Biden and the decency and decorum he would return to the White House.

Unlike Trump, Biden’s relationship with the kingdom will be much more ambivalent because of significant differences with the Saudis, particularly on Iran, where he seeks to restore the Joint Comprehensive Plan of Action (JCPOA), Hurst said.

“From Biden’s point of view, Saudi Arabia remains an ally but a problematic one whose regional agenda is not aligned with that of the US in some key areas.” 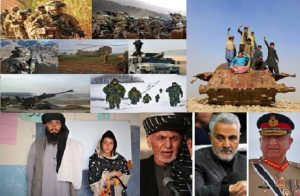 According to Hurst, Biden’s move on arms sales is, therefore, not just about the situation in Yemen, but also a signal to the Saudis that where he perceives Riyadh’s actions as detrimental to American objectives and interests, he will not hesitate to assert US prerogatives at its expense.

However, Washington’s U-turn is also the result of public pressure that put Yemen on the political agenda in the US and thus correlates with Biden’s decision, said Hashemi.

“American backing of the Saudi war effort and Saudi war crimes has generated massive opposition in the US, both in Congress and among civil society activists,” he said.

However, whether Biden’s decision can have a long-lasting positive impact on the Yemen conflict remains to be seen.

“Joe Biden, responding to public pressure, has vowed to shift US policy on Yemen. I remain skeptical that he has the vision and commitment to produce a just and lasting solution to this horrific conflict,” said Hashemi. 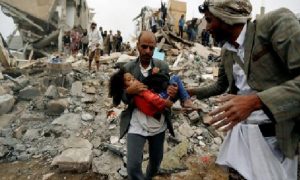 What is almost certain is the domino effect of Biden’s decision has had for MBS’s prerogative in Yemen. Ending the support for the war might even be the main reason for Saudi Arabia’s scramble for peace, Hashemi said.

“The election of Joe Biden is a key factor. Responding to public outrage over war crimes in Yemen that the United States has facilitated, he campaigned on a promise to end arms sales to Saudi Arabia and push for a diplomatic settlement of this conflict.”

Moreover, Hashemi added, the Saudis are cognizant their stock has fallen in Washington, and their peace plan is very much motivated by this reality.

The peace plan is the kingdom’s way to present itself as supportive of US interests in the region and a reliable Western ally, but it remains a “superficial diplomatic effort”, he said.

Meanwhile, the US, United Nations, and regional mediator Oman still see an opportunity for negotiations. With the mediation of Oman, the Houthis have been negotiating with the US representative, Timothy Lenderking, for weeks. On Wednesday, it was reported that Oman hoped for an agreement between Saudi Arabia and the Houthis “very soon”. 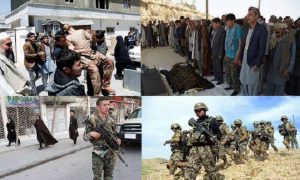 However, Washington’s influence on facilitating a peaceful solution might be limited.

“The only real leverage the US has is with the Saudis and, by implication, with their proxies. They have no real leverage over the Houthis or their Iranian backers,” said Hurst.

However, even the leverage on Saudi Arabia was limited for two reasons in particular.

“First, US arms sales will not entirely stop Riyadh’s ability to continue to engage in the conflict. Second, the situation in Yemen is sadly not important enough to the United States for the Biden administration to issue the Saudi government with the kind of ultimatum that might compel them to make peace regardless of their preference,” according to Hurst.

The latter raises the question of what constitutes a conceivable road map towards peace. While there appears to be a theoretical path, the facilitation is another question entirely given to the actors involved. 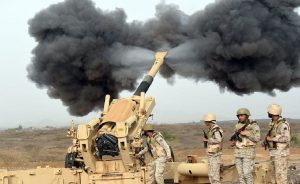 Hashemi’s suggestion which concurs with the view of former UN special envoy to Yemen Jamal Benomar that he recently opined in a British newspaper requires a devoted joint effort.

“A power-sharing agreement is needed among the Yemenis. This must give all the key players a seat at the table, and it must be based on a vision where everyone can have equal access to state resources, political representation, and basic security guarantees,” said Hashemi.

This power-sharing approach would mark a stark contrast to previous propositions.

“Until now, the US-Saudi peace plans have been predicated on Houthi surrender, which is a non-starter for peace in Yemen,” Hashemi noted.

One party, in particular, will hence have to display its proclivity for change.

“In this context, Saudi Arabia is the recalcitrant party in blocking a genuine peace plan for Yemen.” 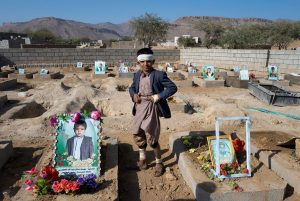 On the other hand, Iran could potentially be persuaded, albeit, with a caveat, Hashemi suggested.

“I think the Iranians would support a peace effort based on the outline of the former UN special envoy (Benomar). A fundamental problem here is the absence of US-Iranian diplomatic engagement.”

Whether the encumbrance of antipathy between Washington and Tehran can be overcome could thus be one of the keys moving forward for peace in Yemen.

While the actors involved may or may not initiate genuine negotiations, the civilian population continues to pay the price for the conflict.

According to the UN, the war has cost about 250,000 Yemenis lives so far. Four million people have been displaced, 80 percent of the population depends on aid, and millions continue to starve. 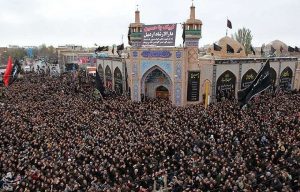 Yemen’s already weak health system to collapse and forced the country to declare a state of emergency.

The appalling legacy the war in Yemen has produced notwithstanding, it appears noticeably absent from a broader public discourse. While Syria and Libya have somewhat remained in the public’s eye and interest, the horrors in Yemen often remain an afterthought. One could even make a case that the international community’s efforts besides organizing donor conferences have been rather subpar, considering the recently taken measures in Libya.

The reason is as simple as it is disgraceful: in the ever-complicated world of geopolitics, the humanitarian catastrophe in Yemen lacks standing.

“Yemen is not a key area of interest for the great powers. It has no natural resources, it is a very poverty-stricken country, and its geostrategic position on the map no longer matters,” said Hashemi.