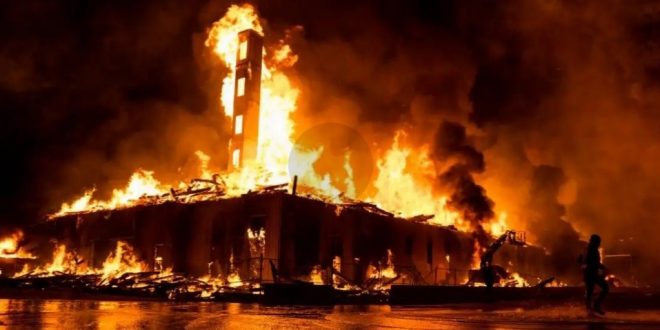 SAINT PAUL/ WASHINGTON: A police station in Minneapolis has been set alight during a third night of protests over the death of an unarmed black man in custody on Monday.

A police officer was filmed kneeling on the neck of George Floyd, 46, despite him saying he could not breathe.

President Donald Trump said “thugs” were dishonoring his memory and called on the National Guard to restore order.

The incident has added to anger over police killings of black Americans, including Breonna Taylor in Kentucky. 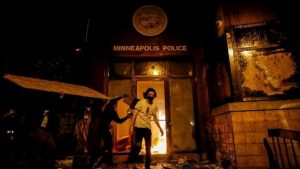 Floyd’s family has demanded that the four police officers implicated in his death face murder charges. Prosecutors have said they are still gathering evidence.

A CNN journalist, Omar Jimenez, and his camera crew were arrested live on air by Minnesota state police officers on Friday morning, apparently because they did not move on when instructed.

The team was released an hour later, after the governor apologized for the arrest.

There have also been demonstrations in other US cities, including New York, Los Angeles, Chicago, Denver, Phoenix and Memphis.

Twitter accused Trump of glorifying violence in a post that said: “When the looting starts, the shooting starts.”

In the last few days, buildings have been burned to the ground or looted.

On Thursday, protesters gathered outside the police department’s 3rd Precinct, the epicenter of the unrest.

Officers fired tear gas and rubber bullets in an attempt to disperse the crowd. But the cordon around the police station, which is near where Floyd died, was breached by protesters, who set fire to it and two other nearby buildings as the officers withdrew.

Minneapolis Mayor Jacob Frey said there had been no choice but to evacuate the police station, adding: “The symbolism of a building cannot outweigh the importance of life, of our officers or the public.”

He called the unrest “unacceptable”, but added that he and everyone else recognized there was “a lot of pain and anger”.

He spoke after a tweet from President Donald Trump blamed Thursday’s violence on a “lack of leadership” in Minneapolis and warned that he would send in the National Guard and “get the job done right” if Frey failed to restore order. 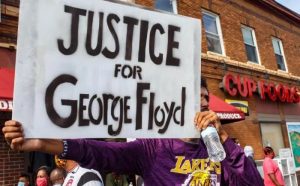 National Guard personnel are normally under state control, although they can be put under federal control in emergencies.

Trump also tweeted: “Any difficulty and we will assume control but, when the looting starts, the shooting starts.”

Twitter placed a “public interest notice” on the message, saying it “violates our policies regarding the glorification of violence based on the historical context of the last line, its connection to violence, and the risk it could inspire similar actions”.

The historical context arises from riots in Miami in 1968. A federal task force found that the use of the phrase about looting by the Miami police chief at the time was a prime factor in the discontent that triggered the unrest.

Twitter flagged two of the president’s posts as potentially misleading earlier this week, prompting him to issue an executive order seeking to limit the legal immunity of social media firms.

Before the police station was set ablaze, Minnesota Governor Tim Walz had activated the state’s National Guard troops at the request of the mayors of Minneapolis and the neighboring city of St Paul, declaring the situation a “peacetime emergency”.

He said the looting, vandalism and arson of Wednesday night had resulted in damage to many businesses, including ones owned by minorities.

“George Floyd’s death should lead to justice and systemic change, not more death and destruction,” he said in a statement, calling on all protests to remain peaceful.