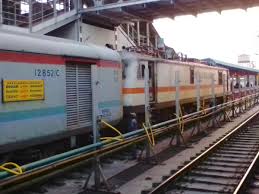 Hyderabad,  Train movement was affected on the Hyerabad-Nizamabad railway route on Saturday when two wheels of a coach of 12793 Tirupati-Nizamabad Rayalaseema Express came off the track near Nizamabad. Luckily, no one was injured in the mishap.

The derailment occurred at about 8 AM between Uppalavai and Sirnapalli stations on the Secunderabad-Mudkhed section of the South Central Railway. The incident, which happened on a single line track, led to the cancellation of Secunderabad-CST Mumbai Devagiri Express and partial cancellation of six other trains.

SCR officials said that passengers of the train were immediately transported to their destinations by making alternative arrangements. Track repair work was underway to restore normal running of trains.

Due to traffic block between Masaipet – Wadiyaram stations in Secunderabad-Mudkhed section, the following trains are partially cancelled

Train No. 57594 H.S.Nanded-Medchal Passenger is partially cancelled between Nizamabad and Medchal from December 24, 2017 to January January 7, 2018.

Train No. 57593 Medchal – H.S.Nanded Passenger is partially cancelled between Medchal and Nizamabad from December 24 to  January 7, 2018. (PMI)