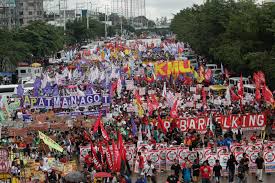 Hyderabad : Today, Indian citizens from every section of society – urban, rural, farmers, youth, corporates, NGOs and political leaders – expressed their responsibility to revive country’s depleting rivers. In the twin cities here, some 6,000 people, sporting “Rally for Rivers” t-shirts, placards, headgears and stickers stood for three hours (8am to 11 am) on the streets on Friday.

Noted socialites Shilpa Reddy, Jwala Gutta, Dr Raghuram joined the Rally at KBR part to extend support for the noble cause. The City was vibrant with volunteers in blue and white urging passersby to give a missed call to 80009-80009 and students interacting with office-goers about the cause. Each missed call will be a vote of support for rejuvenating rivers. Juhi Chawla, veteran Bollywood actress tweeted yesterday appealing to people to wear blue today and tweeted another photo today with a blue dress and an appeal to all to save our rivers by giving a missed call to 80009 80009. Other actors from Hindi, Telugu, Kannada cinema were also seen on the streets in different cities.

Many people in areas like Gatchibowli, Madhapur and Koti stopped their vehicles and joined the cause after hearing about it. The campaign was a curtain raiser to build awareness about the Rally which Sadguru will personally drive through 16 States from Kanyakumari to Himalayas and returns to Delhi onOctober 2 for a grand culmination. The Rally will be flagged off by Minister of Environment, Forest and Climate Change on September 3. Along the way, there will be 23 major events and a host of awareness campaigns to touch every segment of the society. Contact 8500043000 or 8500046000 to know more about the event in Hyderabad on September 14.

Explaining the importance of Rally for Rivers, Sadguru said, “In just one generation, our perennial rivers are turning seasonal. Many smaller rivers have already vanished. If we do not act now to reverse this, the legacy we hand over to the next generation will be one of conflict and deprivation.”

As a part of #RallyForRivers, one lakh schools across India are participating in creative writing and art competitions on the need to revive India’s rivers and possible solutions. In each of these schools, the Nadi Stuti or the river chant- is being played in the assembly followed by an appeal from Sadhguru and Virender Sehwag. An online short film competition is being hosted on the rallyforrivers.org calling all filmmakers to make a short film narrating the story of India’s depleting rivers. Shekhar Kapur, Rakeysh Omprakash Mehra and Prahlad Kakkar will be the jury for this video contest. To sign up, log on torallyforrivers.org.