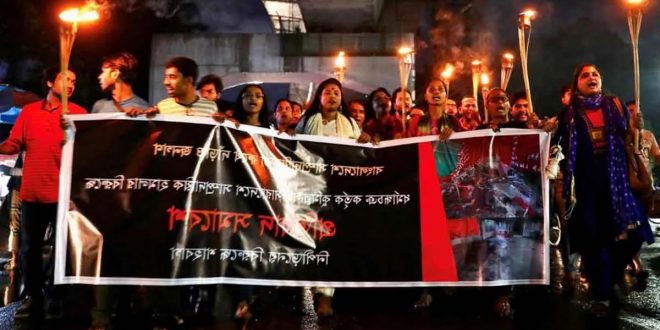 DHAKA: Thousands of members of Bangladesh’s ruling party rallied on Tuesday in support of the nation’s besieged minority Hindus after one of the worst bouts of communal violence in the Muslim-majority nation for over a decade.

The wave of clashes left at least six people dead and dozens of homes destroyed, according to local media. 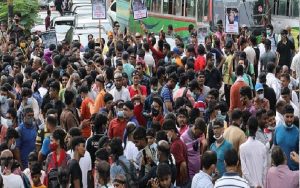 Police said 450 people had been arrested.

The attacks began on Friday when hundreds of Muslims protested in the southeastern Noakhali district accusing Hindus of a blasphemous incident involving the Holy Quran. Several Hindu religious sites have been vandalized, and homes attacked.

Prime Minister Sheikh Hasina’s Awami League party held a rally in the capital Dhaka, with thousands marching along a 4km route in the heart of the city, calling for a halt to the violence.

“Teach your children to love, not to kill,” one said.

Awami League lawmaker and joint general secretary Mahbubul Alam Hanif said party workers planned a series of rallies across the country over the next two weeks. 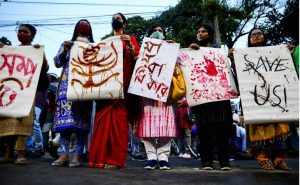 “The panic has to be removed,” Hanif told Reuters.

Hindus make up around 10% of Bangladesh’s nearly 170 million people.

Authorities have filed 71 cases in connection with the violence during the Hindu festival of Durga Puja, a Bangladesh police spokesman said.

Communal tensions have long simmered in Bangladesh, whose constitution designates Islam as the state religion but also upholds the principle of secularism.

“Recent attacks on Hindus of Bangladesh, fuelled by hate speech on social media, are against the values of the Constitution and need to stop,” tweeted Mia Seppo, the United Nations’ resident coordinator.

Rights group Amnesty International called for an investigation and punishment for perpetrators.

A photo has been shared thousands of times in Facebook posts that claim it shows a mosque in Bangladesh that was vandalized by Hindus in a spate of religious unrest in October 2021. 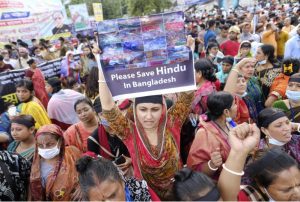 According to an AFP fact-check, the posts are misleading; the picture has circulated in reports from 2016 about a mosque that was targeted in the city of Cumilla, although there have been no official reports on the identity of the vandals.

“Under whose shelter did the Hindus enter a mosque in Cumilla, tear up the Holy Quran and leave their excrement?” reads the Bengali-language post in part.

“In a mosque in Dhanyadaul village of Brahmanpara Upazila of Cumilla, there were reports of defecation and urination, tearing of 25/30 Quran Sharifs, vandalism of Holy Quran and windows of the mosque.”

Bangladesh saw an outbreak of violence targeting minorities in mid-October after footage emerged online that appeared to show a Holy Quran being placed on an idol’s lap at a Hindu festival in the southeastern district of Cumilla.

However, the posts are misleading.

A reverse image search on Google found a wider version of the image shared in a Facebook post in 2016.

The post’s caption reads: “Leaving excrement in the mosque in Cumilla, insulting the Holy Quran!” 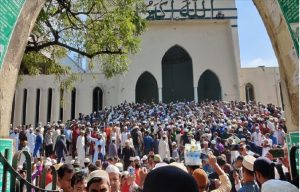 “In a mosque in Dhanyadaul village of Brahmanpara Upazila of Cumilla, there were reports of defecation and urination, tearing of 25/30 Quran Sharifs, vandalism of Quran and windows of the mosque”.

It described the perpetrators as “unidentified miscreants”.

AFP could not locate any report about the mosque attack in October 2021 in mainstream Bangladeshi media outlets. (Int’l News Desk)