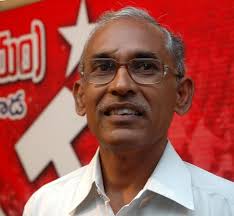 Nalgonda,  CPM leader BV Raghavulu today alleged that the BJP government at the Center was doing ‘Pakoda’ politics and insulting the people.
Speaking to the media here on Tuesday, Raghavulu said the Narendra Modi government, which stated it would strengthen the financial system in the country was not taking steps in that direction. He said the NDA government miserably failed to implement the assurances it made during division of the united Andhra Pradesh.
Both Telugu States’ Chief Ministers N Chandrababu Naidu and K Chandrasekhar Rao have failed to mount pressure on the Centre to achieve the assurances. He suggested to the TRS government to launch movement against the Centre while releasing a white paper on the assurances made in the last four years to the State.