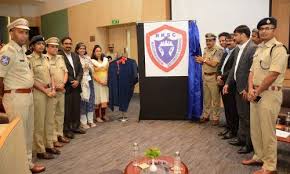 Hyderabad, Jan.3 (PMI): Rachakonda Police Commissioner Mahesh Bhagwat, IPS, today inaugurated an Audio visual van, command control van and gym at CAR Hqrs Amberpet.
Speaking to the media, the CP said in pursuance of the vision of Woman Safety and Road Safety an old vehicle was refurbished into a van at a cost of Rs 15 lakh. The AV van has a LED screen on which awareness videos can be displayed. On the other two sides, posters can be displayed. Audio system can be used to address the public. The AV van can serve the cause of awareness on woman safety, road safety and cyber crimes. Besides, it could be used for crime prevention and also to deal with law and order situations where issue warrants communication with public. The van will move

across the Commissionerate, placed at junctions, public places, spreading awareness and used by special wings during their programs.
Similarly a command control van issued by Police IT&C department to the Commissionerate was also inaugurated. With facility to install repeaters, VHF sets and a surveillance camera with screen, the van is a significant addition in improving communication and surveillance capabilities during bandobust. Mobility factor adds to the utility.