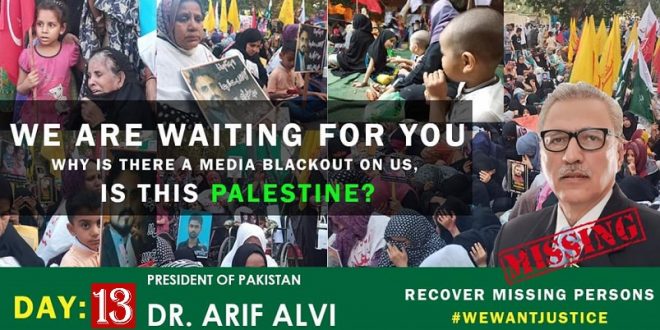 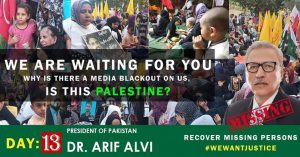 MELBOURNE/KARACHI: On behalf of specific directions of an ‘Islamic country’ and as per strict orders of an unknown ‘force’, the complete blackout of entire Pakistani media has entered in 13th day against the sit-in of Shia community that gathered in-front of the House of the President of Pakistan, Dr Arif Alvi and demanding immediate safe recovery of hundreds of enforced disappeared Shias nationwide.

Thousands of Shia community members are protesting since last thirteen days amidst scorching heat while the holy month of Ramadan has also started but the protesters are not ready to leave the sit-in without proper arrangement of Iftar (breaking the fast) and Sehr (breakfast). Thousands have gathered outside the president’s residence to raise a collective voice against forceful abductions and compromise on their constitutional rights, vowing not to leave the place unless their demands are addressed.

More and more people are joining the protest with every passing day – from human rights activists to notable representatives of the Shia community while neither none of one electronic channel out of 44 nor any of print group over 2,000 could cover the ‘world largest and sensitive issue’ yet even no one is allowed to reach at sit-in while the above ‘force’ has already been ordered government and all law enforcing agencies regarding severe action against sit-in organizers, participants and protesters hence, the city police have already been registered a criminal case against campaigners a couple of days ago.

The protestors insist on securing their constitutional rights, especially the right to free and fair trial. They demand the president of Pakistan to listen to their grievances and address them urgently, or else the protests will continue. As Karachi continues to swelter at over 40 °C, the women and children refuse to leave unless they are informed about the whereabouts of their loved ones.

”You can feed an Indian pilot; treat him with respect, but what about our women who are on roads? Who will listen to us?” – said an elderly woman whose son was forcefully abducted 3 years back while questioning a ruling parliamentary member.

”Prove the allegations you have on his name in court. If he is found guilty, I myself will support even if he is hanged but who gives them the authority to abduct him from his home and disappear him? Is no one going to question them”, she said, in a painfully loud voice.

Pakistan nearly has 4000 unresolved cases of enforced as BBC reports in their article “The story of Pakistan’s disappeared Shias”.

President Arif Alvi, however, has remained silent on the situation, until recently, when he was questioned in a program on the channel Abb Tak. He said he is aware of the protest happening outside his residence and agrees with the demands.

Meanwhile, a large number of overseas Pakistanis once again warned Pakistani government, as well as the said ‘force’ to look-in-to this issue seriously and release all abductees before Eid-ul-Fitr otherwise, they will have to compel to start sit-ins all over the world in-front of Pakistani embassies and high commissions.

Post Views: 8
2019-05-10
admin
Previous SSC Exam results to be declared on May 13
Next SUCCESSFUL END OF ‘SHIA SIT-IN’ AFTER 13 DAYS Pakistan admits detention of thousands of missing persons AGENCIES ASSURES TO RELEASE ALL ABDUCTEES