Hyderabad, Oct.19 (PMI): Two persons were injured when  a portion of the 100-year old ‘Nampally Sarai’ collapsed today. The injured persons were shifted to hospital and are undergoing treatment.
The incident happened around 4.30 p.m when the roof of the second floor of the  Sarai, a rest house constructed during the Nizam’s era, collapsed with a loud sound. Very few persons were present on the premises when it collapsed,  and sustained injuries as debris fell on them. 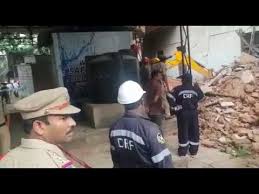 On receipt of  information, the Nampally police rushed to the spot and shifted the injured in the ‘108’ ambulance service to the hospital for treatment. Disaster Rescue teams of the GHMC reached the spot and  are removing the debris to find out if any more persons are is trapped under the rubble. Officials of GHMC are supervising the rescue operations.
The Sarai was built in 1919 by Meer Mahboob Ali Khan for the convenience of  the passengers coming from different places.   The building was declared as a heritage structure in 2011