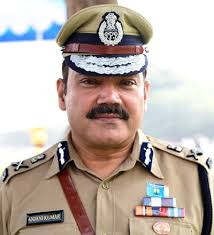 Hyderabad Aug. 28( PMI):  Ganesh Festival this year will commence from September 13 with the installation of Idols and conclude on September 23 with the final immersion procession. This calls for several regulatory measures to maintain peace, tranquility and public order.
City Police Commissioner Anjani Kumar, IPS, informed the public in general and the concerned organizers in particular, that Ganesh idols have to be installed in public places in various localities of the City, after providing prior intimation and then by obtaining prior Police Clearance in writing from the concerned Divisional Assistant Commissioners of Police. Separate Police Clearance was required for each Ganesh idol to be installed. Forms of intimation for Ganesh idol installation and processions will be available at all the Police Stations in the City from August 30 to September 4. Persons/Organizers desirous of installing Ganesh idols in public places and also taking out procession for immersion may submit Form of intimation at the Police Stations concerned on or before September 9.
The following are the important points to be borne in mind and observed by those proposing to install Ganesh idols: Form of intimation seeking Police Clearance to install Ganesh idols will have to be handed over at the respective Police Stations, clearly indicating the place and the date of the proposed installation, as also date, time, route and the destination of the proposed immersion procession.
The organizers seeking Police Clearance for installation have to furnish a “no objection certificate” from the owner of the premises or land, irrespective of the fact whether it is Private or Government land. Installation will be allowed only at places where it will not cause obstruction to free flow of traffic and where there is no threat to public peace and order.
No unauthorized electricity connection at Pandals will be allowed. It shall be incumbent on the part of the Organizers to apply for supply of electricity to the T.S.S.P.D.C.L., and obtain Police Clearance in this regard. Certificate from the T.S.S.P.D.C.L., that the electricity connection is authorized has to be obtained and the same should be enclosed with the Form of intimation Use of loudspeakers will be restricted to Box Type only and Police Clearance is required to be taken both by the Organizers who hire the equipment and the Dealers/Company supplying the equipment. The noise levels should be kept within the permissible limits. A loud speaker or a public address system shall not be used during the nights between 10:00 pm and 06:00 am, as per the directions of  Supreme Court of India.
The Organizers must provide volunteers with suitable identity cards/badges and use these Volunteers for maintaining queues and public order at the time of worship in various Ganesh Mandaps and to guard the idols and pandal. The guarding of idols and the precautionary measures with reference to lighting of lamps and “Aarthi” will be the sole responsibility of the Organizers.
Organizers desirous of taking out procession for immersion of the idols will submit Form of intimation individually to the ACsP through the Station House Officers concerned mentioning the date, time and route for the said procession and obtain Police Clearance beforehand.
All the Form of intimation duly filled in along with all the relevant certificates (as enclosures) must be handed over at the respective Police Stations by September 9 and a receipt obtained. Form of intimation received later on are liable to be rejected. The Station House Officers and Divisional Asst.
Commissioners of Police will hold meetings with the Organizers in each P.S. area and finalize the arrangements for issue of Police Clearance, before the commencement of the festival. The Organizers will have to strictly adhere to the conditions, routes and timings indicated in the Police Clearance to install the Ganesh idols.
All the locality elders, Organizers, social workers, Peace Committee and Maithri Members and local leaders are requested to co-operate with the Police and to help in maintaining public order and peace in the City. The above instructions do not apply to Ganesh Idols installed in Private residences which are not made accessible to the public and not in the public view. Persons installing Idols in the cellars of the complexes and those taking them out public procession shall apply for Police Clearance.