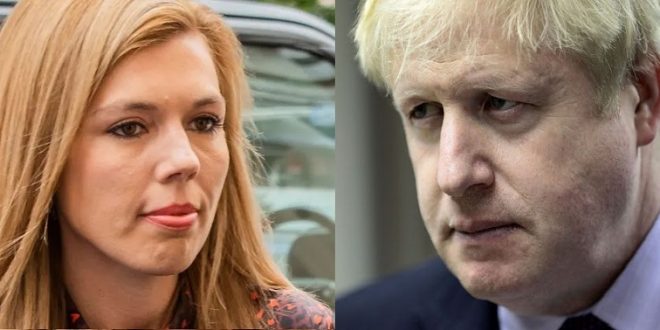 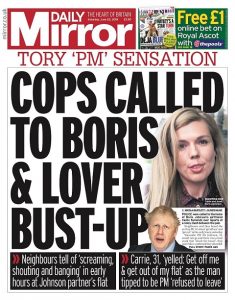 MELBOURNE/ LONDON: Police were called to the home of Boris Johnson and his girlfriend Carrie Symonds in the early hours of this morning after a heated argument between the pair.

A neighbour made the call after hearing screaming and shouting coming from their plush home in south London, the Guardian reported.

Symonds, 31, was heard telling the Tory leadership candidate to “get off me” and “get out of my flat”.

Locals also reported that there was “banging and slapping” during the confrontation.

Concerned neighbours called to the flat but had no response despite knocking three times, it is claimed.

A neighbour said: “I [was] hoping that someone would answer the door and say ‘We’re okay’. I knocked three times and no one came to the door.”

The Guardian says it heard an audio recording of the incident which had been made by neighbours. 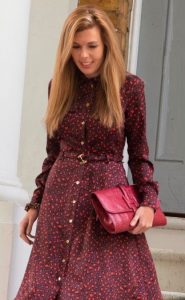 The west London MP refused to leave the home despite numerous demands from Symonds, and apparently told her to “get off my f****** laptop”.

The neighbour said: “She was saying ‘get out of my flat’ and he was saying no. And then there was silence after the screaming. My partner, who was in bed half asleep, had heard a loud bang and the house shook.”

In the audio clip, Johnson was told that he had ruined her sofa with red wine.

“You just don’t care for anything because you’re spoilt. You have no care for money or anything.”

Two police cars arrived at the scene and but later left after receiving assurances from the couple that they were both unharmed.

Another neighbour said she had “never heard smashing and shouting like it” before.

The nursery worker, who gave her name as Fatima, 32, lives in a flat in the building next door in Camberwell, south London.

She said: “All I heard was shouting and screaming from the lady. I couldn’t hear clearly – she was really angry though. I could hear things being thrown around and smashing.” 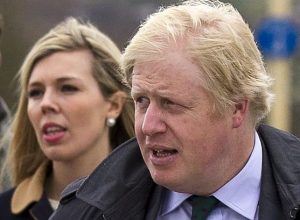 “I was already awake because I was watching something on TV. I had to mute it because I have never heard shouting and smashing things like that. I am not used to that it is a quiet neighbourhood – there’s nothing that goes in so that’s why I was concerned.”

The nursery worker, whose four year old son was sleeping inside, added: “I didn’t call the police because the police arrived like a few minutes after. I saw a police van and a police car turn up. I knew they would probably deal with the situation.

“It went on for just over ten minutes. His voice was quite quiet but her voice was more loud. I couldn’t make out what she was saying because she was just very, very angry.

“The police car pulled up and then a police van a few minutes later.

“They were there less than ten minutes.”

The neighbour also told the Mail: “I could hear glasses or plates being thrown quite a few times.”

The Metropolitan Police were asked about the incident and provided information about a call-out to a south London address in a statement to the Mirror. 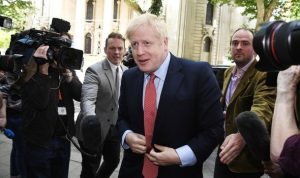 A spokesman said: “At 00:24hrs on Friday, 21 June police responded to a call from a local resident in the SE5 area of Camberwell.

“The caller was concerned for the welfare of a female neighbour.

“Police attended and spoke to all occupants of the address, who were all safe and well.

“There were no offences or concerns apparent to the officers and there was no cause for police action.”

Ms Symonds is a former spin doctor for the Conservative party.

Would-be PM Johnson, 54, has been in a relationship with the former Tory communications chief, 31, since last year.

The former London Mayor is locked in a divorce with second wife Marina Wheeler.

In September last year the pair released a statement confirming their divorce plans.

It read: “Several months ago, after 25 years of marriage, we decided it was in our best interests to separate.

It emerged earlier this month Johnson has been barred from selling their £3.75m Islington home without a court’s approval, which has fueled rumours he could be set to marry his girlfriend. 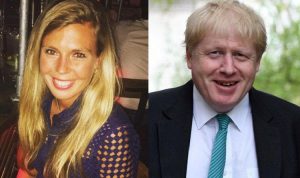 During his time in journalism and public office, he had at least four extra-marital affairs and is claimed to have made at least two of his mistresses pregnant.

He married his first wife, university sweetheart Allegra Mostyn-Owen, in 1987.

They divorced after he had an affair with childhood friend Marina, whom he wed in 1993.

In 2004, he admitted having an affair with writer Petronella Wyatt while both worked on the magazine The Spectator. Her mother later claimed she had a miscarriage and an abortion by Johnson.

In 2009, Boris fathered a love child with art consultant Helen Macintyre, then 39 while he was married.

He was forced to admit the existence of the child in a court case after a judge ruled it was in the public interest. 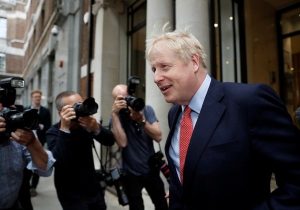 Johnson was yesterday confirmed as in the final running to lead the UK after PM Theresa May stepped aside.

He will face Jeremy Hunt in a leadership contest.

He has led the votes among Tory party members during the leadership race, and is widely tipped as most likely to get the keys to number 10.