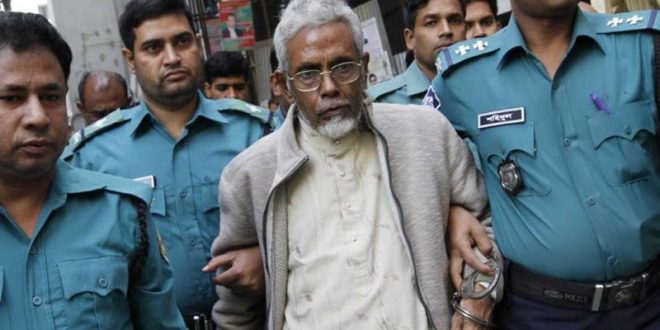 DHAKA/KARACHI: Protests and rallies are expected against the detention of Daily Sangram’s Editor Abul Asad in India and Pakistan while the political conflicts have already been started across Bangladesh between Awami League and Jamaat-e-Islami’s (JI) activists, sources confirmed.

On Saturday, Police in Bangladesh have arrested the editor of a newspaper after it described an executed opposition leader convicted for war crimes as a “martyr”.

Abdul Quader Molla, a senior official of the Jamaat-e-Islami (JI) opposition party, was hanged on December 12, 2013 over crimes committed during Bangladesh’s 1971 war of independence.

“Today is the sixth death anniversary of martyr Abdul Quader Molla,” read the headline of a report published on Thursday by Daily Sangram, a newspaper widely perceived as a mouthpiece for the Islamist party.

On Friday, members of groups such as Muktijoddho Mancho (Freedom Fighters Platform) and Bangladesh Chatra League, the student wing of the ruling Awami League party, launched protests and burned copies of the newspaper.

The demonstrators also vandalised the Daily Sangram’s offices in Bangladesh’s capital, Dhaka, while police arrested the newspaper’s editor, Abul Asad, in a case filed under the Digital Security Act. A court in Dhaka on Saturday placed Asad on a three-day remand under police custody.

“I would term it blasphemous,” Md Al Mamun, a Muktijuddho Mancha leader told Al Jazeera, referring to the newspaper’s description of Molla, who is infamously known as “the butcher of Mirpur”, convicted for the murder of hundreds of villagers in a Dhaka suburb during the war.

“The paper had shown complete insolence by publishing the news with such a headline,” he said.

“Calling him a martyr not only acts against the spirit of liberation war but also shows disrespect to the court,” Mamun added, threatening prolonged protests if authorities took no action against the newspaper.

Journalist Nazmul Ahasan argued that Daily Sangram’s description of Molla did not just stem from the publication’s belief that he was subjected to “arguably an unfair process” but from an ideological position.

“Even if he had been found guilty in a fair trial, Sangram would have done the same. As a newspaper subjected to laws and realities of this land, [it] cannot simply term ‘martyr’ a person who was convicted of war crimes by the highest court of the land,” Ahasan told Al Jazeera.

“That being said, under no circumstances can physical harms or humiliation be ever justified in a civilised society,” he said.

“The way (the) Sangram office was vandalised and its editor disgracefully handed over to the police was pure thuggery. What’s more, the danger of justifying such hooliganism is that tomorrow another newspaper could suffer the same fate for even pettier crimes such as opposing the development of the country,” he added.