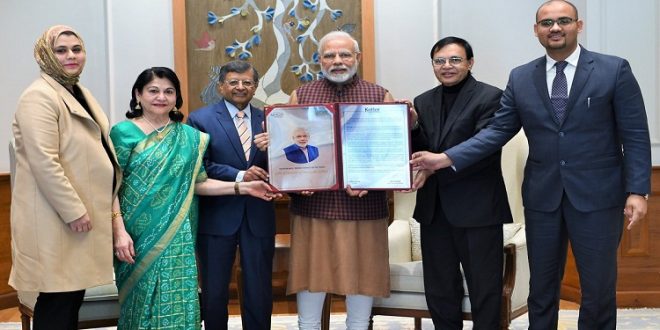 Prime Minister Narendra Modi, today received the first-ever Philip Kotler Presidential award at his residence in New Delhi. The Award focuses on the triple-bottom-line of People, Profit and Planet.  As per the award citation, Mr Modi has been selected for his outstanding leadership for the nation.

It said, his selfless service towards India, combined with his tireless energy has resulted in extraordinary economic, social and technological advances in the country. The citation also mentions that his visionary leadership has also resulted in the Digital revolution including the Unique Identification Number, Aadhaar, for social benefits and financial inclusion.

It is enabling entrepreneurship, ease of doing business, and creating a 21st-century infrastructure for India. An official release said, the citation also mentions that initiatives such as Make in India, Startup India, Digital India, and Swachh Bharat have positioned India as one of the most lucrative manufacturing and business destinations in the world. The award will be offered annually to the leader of a Nation.

Prof. Philip Kotler is a world-renowned Professor of Marketing at Northwestern University, Kellogg School of Management. Owing to his ill-health, he deputed Dr. Jagdish Sheth of EMORY University, Georgia, USA, to confer the award.