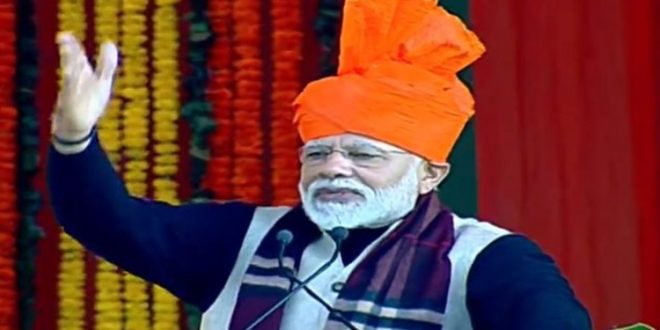 PM Modi had earlier visited Jammu, Srinagar and Leh on 18th May last year  to lay the foundation stones for various infrastructure projects in the state. In the last leg of his day long visit, PM Modi arrived in Srinagar and unveiled the plaque to mark the laying of foundation stone for Rs 1828 crore All India Institute of Medical Sciences (AIIMS) coming up on 207 acres at south Kashmir’s Awantipora area of Pulwama district.

The Rs 3 crore facilities for launch of Rural BPO, in nrth Kashmir’s Bandipora district was also digitally inaugurated by the PM. This will enhance employment opportunities for the youth in Bandipora and neighbouring districts.

PM also digitally inaugurated Multipurpose Indoor Sports Facility at Sehpora are of Ganderbal district in Central Kashmir. The indoor sports facility will be an invaluable asset for the youth of the district Ganderbal, where they will get the chance to play indoor games.

PM Modi also laid the foundation stone for construction of Transit accomodation for Kashmiri migrant employees in Kashmir valley through the unveiling of plaque coming up at the cost of Rs 920 Crores.

He also dedicated 400 KV D/C Jalandhar-Samba-Rajouri-Shopian-Amargarh (Sopore) transmission power line to the nation. The project has augmented the grid connectivity in Jammu & Kashmir. PM also declared 100% electrification of households in the State under SAUBHAGYA Scheme.

Prime Minister also interacted digitally by connectring with the students from the states of Assam, Gujarat, Haryana, Odisha, Maharashtra and Telangana. After his address, PM Modi also held an interaction with around 250 newly elected Sarpanches at SKICC.

Earlier, he also inspected Dal Lake in Srinagar. Heavy deployment of police and para military security personnel had been made at SKICC, the venue of the main function for digitally inaugurating the various projects.

Prime Minister Narendra Modi said central government is committed to equitable socio economic development of all the three regions of the State. He said concerted measures shall be continued to bring normalcy and peace to ensure harmonious socio-cultural milieu is restored besides establishing political stability in Jammu & Kashmir state.

He exhorted upon the youth to come forward and embark on the development wagon while excelling in education, skill development and by reaping benefits of the fast growing economy of the country. PM Modi assured the youth of wholehearted support that will provide them bright future free from poverty, corruption, insecurity and exploitation.