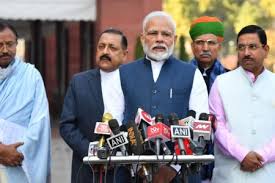 Prime Minister Narendra Modi has said that the new reforms announced in the budget will boost the economy, strengthen the foundation of the economy and will financially empower every citizen.

In a televised address today, Mr Modi said, Government has given a lot of emphasis on four sectors agriculture, infrastructure, textiles and technology in the budget to increase the employment generation.

He stressed that an integrated approach to agriculture has been adopted in the budget. The Prime Minister expressed confidence that along with traditional methods it will increase the value addition in horticulture, fisheries, animal husbandry and will increase employment.

Under the Blue Economy, youth will get new opportunities in the field of fish processing and marketing. Mr Modi said, to double the income of the farmers, sixteen action points have been created which will increase employment in the rural areas. He said, modern infrastructure is of great importance for modern India and the infrastructure sector is also a large employment generator.

Mr Modi said, the construction of sixty-five hundred projects from 100 lakh crores rupees will increase employment Mr Modi said, the Budget has further strengthened the Government’s commitment of minimum government and maximum governance. He said, Budget will give new energy to youth in-country by promoting startups. The Prime Minister said, the taxpayer charter announced in Budget will clarify the rights of taxpayers.

He congratulated Finance Minister Nirmala Sitharaman and her team for the first budget of this decade saying the Union Budget has vision and action.